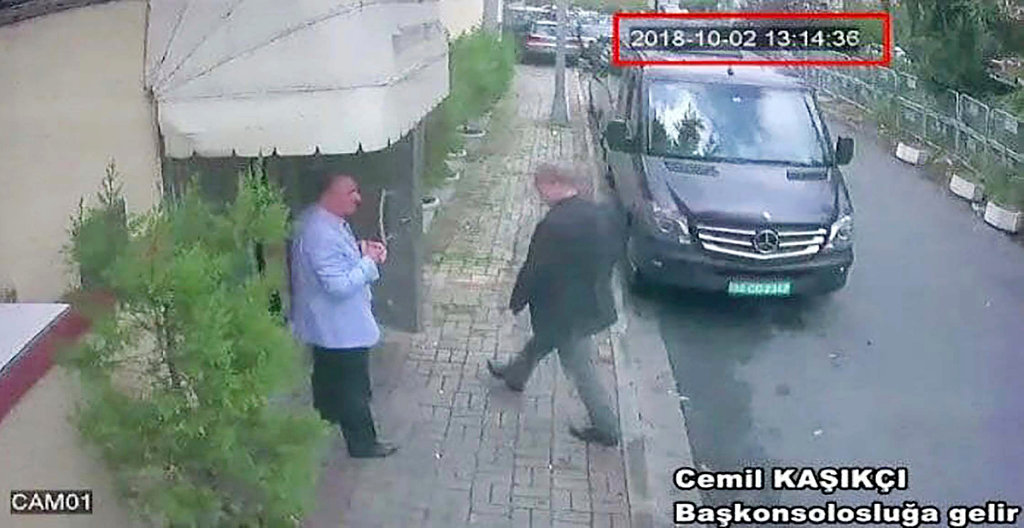 Further expanding on their rather absurd cover story for the death of journalist and dissident Jamal Khashoggi, the Saudi Foreign Minister said in remarks on Sunday that his death was the result of a ‘rogue operation’ unconnected to Crown Prince Mohammed bin Salman and King Salman:

ISTANBUL — Saudi Arabia’s foreign minister denied on Sunday that the kingdom’s crown prince and de facto ruler, Mohammed bin Salman, had any prior knowledge of an operation that resulted in the killing of Jamal Khashoggi and said that the agents involved “weren’t people closely tied” to the crown prince.

“Even the senior leadership of our intelligence service was not aware of this,” Jubeir added, marking the first public comments by a senior Saudi official since early Saturday, when authorities in Riyadh announced they had arrested 18 people and fired five top officials in connection with the journalist’s death.

Jubeir said Saudi Arabia does not know where Khashoggi’s body is and that officials have not listened to an audio tape Turkey claims proves Khashoggi’s torture, killing and dismemberment

Seeking to contain the international fallout, which has included calls for a transparent independent investigation and a host of nations and corporations pulling their participation in a high-profile investment conference in Saudi Arabia this week, Jubeir said the shifting Saudi account of what happened was a result of a coverup by the arrested agents.

“They told us that he left the consulate,” Jubeir said. “They came back to Saudi Arabia; they filed a report to that effect.”

A public prosecutor launched his investigation after “discrepancies” between the agents’ report and the reports coming out of Turkey, which Jubeir said revealed that the team had falsified its report.

“The individuals who did this took this outside the scope of their authority. Obviously, it was a tremendous mistake made. And what compounded the mistake was their attempt to cover up.”

Jubeir added, “This is an aberration, this is a mistake, this is a criminal act, and those responsible for it will be punished.”

Jubeir’s claims aren’t much different from the absurd, hard to believe, explanation that the Saudis put forward last week when they claimed that Khashoggi’s death occurred as a result of a fight gone wrong that occurred after he was detained at the consulate in Istanbul on October 2nd. That story, of course, is in conflict not only with the evidence that has come forward in the ensuing three weeks but with what we know about how the Kingdom of Saudi Arabia operates. What they expect us to believe, essentially, is that an operation that was apparently led by some of the closest aides to the Crown Prince and included a fifteen-member team that just happened to travel to Istanbul on the morning of the day Khashoggi was scheduled to return to the consulate was carried out without the knowledge and approval of the man who is, besides the King himself, the most powerful person in Saudi Arabia. We’re also supposed to believe that this team, which included members of the Royal Guard as well as the Saudi military and intelligence services and, as we learned this morning, a man clearly intended to act as a body double for Khashoggi. Finally, we’re being asked to believe that all of this, including the presence of men experienced in interrogations and another with extensive experience in conducting autopsies, made their way to Turkey, and into the consulate, without the permission and knowledge of either the Crown Prince or the King.

This is utterly implausible for several reasons.

First, it’s simply impossible to believe that any operation of this type, whether its goal was kidnapping or murder could have have been carried out without the knowledge of the two most powerful men in the Kingdom. As I’ve said before, there’s quite literally nothing of importance that happens inside the Kingdom’s government that one or both of these men don’t know about and haven’t approved. Additionally, the fact that the operation involved people who are intensely loyal to one or both men make it unlikely that they would have felt free to undertake an operation like this on a “rogue” basis.

Second, it’s hard to believe that the original intent of the operation was simply to interrogate Khashoggi or kidnap him and bring him back to the KSA for interrogation and potential criminal charges. This is belied by the fact that the team that traveled to Turkey, as I stated above, included a man who specializes in autopsies, others who specialize in interrogation and torture, and, perhaps most telling, included someone who apparently just happened to be carrying a bone saw. To borrow a phrase, you don’t bring a bone saw to an interrogation. Under the circumstances, it seems clear that the people who planned this operation anticipated that it would end up Khashoggi’s death and that there would be a need to get rid of evidence quickly and efficiently. What better way to do that then to carve up the body and dispose of the body parts either somewhere in and around Istanbul or, more likely, somewhere in the KSA once the team returned.

Finally, even if it were true that the original intent of the operation as to interrogate or kidnap Khashoggi, this is hardly an excuse or a defense for what he occurred. Essentially, this explanation is asking the world to accept the fact that the Saudis “only” intended to kidnap and interrogate via torture a man who had done nothing wrong other than dissent from the policies of the government in Riyadh, that his death was an “accident,” and that they apparently responded to this accidental death by carrying his body back to Saudi Arabia in pieces in luggage that had been brought by the team that had arrived in Istanbul earlier in the day. Under most definitions, this would still qualify as murder, and the Saudis should not be permitted to get away with trying to brush it aside with such an utterly ridiculous claim.

All of this comes on the same day that Turkey’s President is saying he will present his nation’s evidence to the world on Tuesday:

ISTANBUL — President Recep Tayyip Erdogan of Turkey, turning up the pressure on Saudi Arabia, promised Sunday to reveal everything his country knows about the killing of Jamal Khashoggi inside a Saudi consulate.

Mr. Erdogan’s statement came as the Saudi foreign minister publicly apologized to Mr. Khashoggi’s family, but stuck with his government’s contention that the killing had been a “tremendous mistake” by Saudi operatives acting “outside the scope of their authority.”

Turkish officials have suggested that Mr. Khashoggi’s death was ordered at the highest levels of the kingdom. And Mr. Erdogan, who has commented little on the matter publicly, on Sunday indicated that he has more to say about what happened.

“We said that we will reveal it,” Mr. Erdogan said in a speech broadcast live on Sunday. “God willing, I will make my statement about Jamal Khashoggi in the parliamentary group on Tuesday.”

Turkish officials have indicated that the Saudi version — that Mr. Khashoggi died in a botched attempt at interrogation and abduction — does not fully satisfy them.

For several days, Turkish officials speaking anonymously have told news organizations that a team of 15 Saudis flew to Istanbul on Oct. 2 to kill Mr. Khashoggi, most likely on the orders of the crown prince, Mohammed bin Salman. They have even claimed to have recordings of his torture and killing.

“We are searching for justice and it will be revealed in full nakedness,” Mr. Erdogan said on Sunday afternoon, at an event to open a new subway line in Istanbul. “Not with ordinary steps, but in full nakedness.”

“Why did 15 people come here?” he asked. “Why have 18 people been arrested? All of this must be explained with all the details. On Tuesday, I will tell this very differently in my parliamentary group speech. I will go into detail.”

Mr. Erdogan makes a weekly address in Parliament to lawmakers from his Justice and Development Party. His speech is always broadcast live and often sets the government’s agenda.

He had been uncharacteristically quiet about the scandal around Mr. Khashoggi’s disappearance, even as a steady stream of leaks from his own government helped the case capture the world’s attention and shook relations between Saudi Arabia and the United States. Yet Mr. Erdogan, who knew Mr. Khashoggi personally and took great affront at how Saudi Arabia handled the affair, did use information gathered by his intelligence services to pressure the Saudis into owning up.

In particular, Mr. Erdogan has aimed some of his ire toward Crown Prince Mohammed, whose firm grip on power in the kingdom has been called into question over the death of Mr. Khashoggi, who wrote columns for The Washington Post. Mr. Erdogan made an apparent swipe at the crown prince in his speech Sunday.

“And right now, what does the world say about whom?” he said. “We will look into all of this.”

The subtext of all of this, of course, is the fact that there has been something of a rivalry between Turkey and Saudi Arabia and, more personally, between Erdogan and the Crown Prince for dominance in the Muslim world, something that the Saudi’s have largely enjoyed due to the fact that they control access to Mecca and Medina, two of the holiest sites for the world’s one billion Muslims. In that respect it will be interesting to see just how much information Erdogan is willing to make public to put a stick in the Saudi’s eyes. Presumably, though, if he has the evidence that would effectively shred the already implausible cover story to shreds, he will offer it in his speech tomorrow.