Saudi Arabia's new King has shaken up the Royal Family, and that could have interesting results. 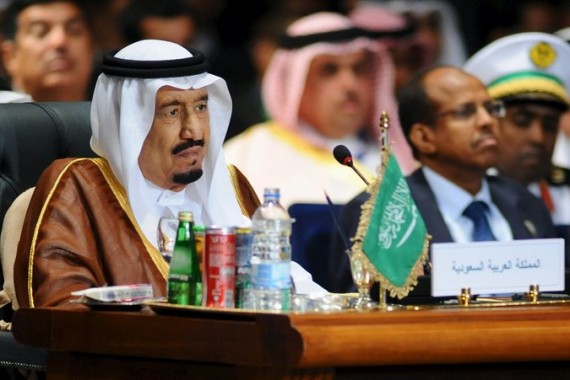 Just some three months after ascending to the throne after the death of his brother, King Salman of Saudia Arabia has shaken up the Saudi Royal Family:

BEIRUT — King Salman of Saudi Arabia issued a series of surprise royal decrees early Wednesday, shaking up the line of princes slated to succeed him to the throne, replacing a number of ministers and further enhancing the power of his own line.

The moves show Salman is shifting further away from the legacy of his predecessor, King Abdullah, who died in January.

Saudi Arabia has joined a United States-led coalition that is bombing the militants of the Islamic State in Syria and Iraq. It is also leading a bombing campaign against Houthi rebels who have seized a large portion of territory in neighboringYemen. The new appointments are unlikely to lead to big changes in these policies.

Of all the changes, the reordering of the line to the throne is likely to draw the most scrutiny inside the kingdom because of competition between branches of the sprawling royal family for positions leading to the throne.

The removed regent, Prince Muqrin, was close to King Abdullah and named by him as deputy crown prince, a position that had not previously existed.

The reshuffle was announced by royal decree via state television early on Wednesday.

Salman relieved Crown Prince Muqrin from his post, which was reportedly done upon his request. Mohamed bin Nayef, 55, the grandson of the founder of Saudi Arabia, was appointed as crown prince and was also to remain minister of interior.

“This is the first time that a grandson of the founder of the country [King Abdulaziz], rather than a son, is appointed crown prince,” our correspondent said.

Khalil Jahshan, the executive director for the Arab Centre of Washington from Fairfax, Virginia, said that the reshuffle constitutes a “political earthquake of the greatest magnitude”.

“The Saudi Arabia we knew a few hours ago is no longer,” Jahshan told Al Jazeera, adding: “These are serious changes that will have repercussions not only domestically but also internationally.

“This is a very decisive answer by King Salman to the doubts that many experts have expressed since he came into power with regards to his health, his decisiveness and his control over political matters in the kingdom. And this is his unequivocal answer.”

Faisal “asked to be relieved from his duties due to his health conditions,” said the royal decree published on the official Saudi Press Agency, adding that he was appointed as an adviser and a special envoy of King Salman, as well as a supervisor on foreign affairs.

The latest nominations, part of King’s Salman second cabinet reshuffle since he acceded the throne on January 23, come amid increased tensions between Saudi Arabia and its regional rival Iran, following the kingdom’s military intervention in neighbouring Yemen.

This move seems to have caught most everyone inside and outside Saudi Arabia who follows the politics of the Royal Family by surprise, and the biggest change appears to be the generational one. By replacing the Crown Prince, King Salman has virtually guaranteed that the next King of Saudi Arabia will be someone other than one of the vast numbers of sons of the nation’s founder, Abdul Aziz, for the first time since the nation was founded. Instead, this move will push the succession battle into the second generation of Abdul Aziz’s family, his grandson’s. To a large degree, these are men who grew up during the era when Saudi Arabia became the immensely wealthy petroleum Kingdom that it is today, and many of them were educated in the West and have likely spent more time their than their father’s did. Whether this means anything for the future direction of the kingdom is unclear, especially since it’s unclear just how much longer the Saud family will be able to maintain legitimacy as the rulers of Saudi Arabia given the revolutionary and other forces that have swept across the Middle East over the last five years.

In the short term, this move seems likely most intended to secure Salman’s own position. As I noted when Abdullah died, there were some doubts at the time about Salman’s physical health and, indeed even about his mental faculties, as a result of previous health issues. Over the course of the past three months, he seems to have acted to ensure that there was no doubt about his own position, both with the cabinet shakeups and other policies. Perhaps the biggest policy initiative of his short time in office, for example, has been the Saudi intervention in the civil war in Yemen, which some observers have described as a proxy war with Iran. That is probably an exaggeration at this point, but it seems fairly clear that the Saudis are intent on preventing the Iranian-backed rebels from taking control of the country. That war, which Daniel Larison has described as “reckless,” seems at the moment to only be making the situation in Yemen worse, and potentially creating a hive on instability on the Kingdom’s southern border. If it turns out to be a failure, one wonders what that will mean for the future of the King.