A high school kid has figured out that changing fonts could save the taxpayer millions in printing costs. 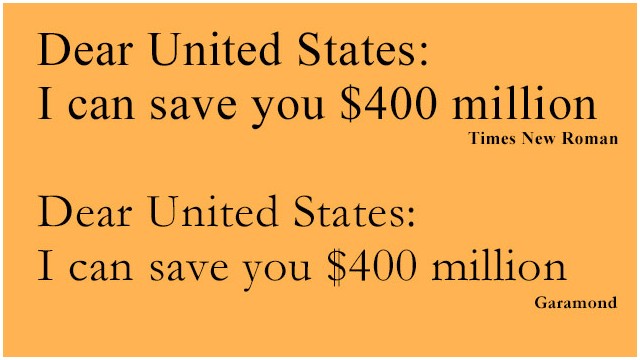 A high school kid has figured out that changing fonts could save the taxpayer millions in printing costs.

CNN (“Teen to government: Change your typeface, save millions“):

An e. You can write it with one fluid swoop of a pen or one tap of the keyboard. The most commonly used letter in the English dictionary. Simple, right?

Now imagine it printed out millions of times on thousands of forms and documents. Then think of how much ink would be needed.

OK, so that may have been a first for you, but it came naturally to 14-year-old Suvir Mirchandani when he was trying to think of ways to cut waste and save money at his Pittsburgh-area middle school.

It all started as a science fair project. As a neophyte sixth-grader at Dorseyville Middle School, Suvir noticed he was getting a lot more handouts than he did in elementary school.

Interested in applying computer science to promote environmental sustainability, Suvir decided he was going to figure out if there was a better way to minimize the constant flurry of paper and ink.

Reducing paper use through recycling and dual-sided printing had been talked about before as a way to save money and conserve resources, but there was less attention paid to the ink for which the paper served as a canvas for history and algebra handouts.

“Ink is two times more expensive than French perfume by volume,” Suvir says with a chuckle.

He’s right: Chanel No. 5 perfume costs $38 per ounce, while the equivalent amount of Hewlett-Packard printer ink can cost up to $75.

So Suvir decided to focus his project on finding ways to cut down on the costly liquid.

Collecting random samples of teachers’ handouts, Suvir concentrated on the most commonly used characters (e, t, a, o and r).

First, he charted how often each character was used in four different typefaces: Garamond, Times New Roman, Century Gothic and Comic Sans. Then he measured how much ink was used for each letter, using a commercial tool called APFill® Ink Coverage Software.

Next he enlarged the letters, printed them and cut them out on cardstock paper to weigh them to verify his findings. He did three trials for each letter, graphing the ink usage for each font.

From this analysis, Suvir figured out that by using Garamond with its thinner strokes, his school district could reduce its ink consumption by 24%, and in turn save as much as $21,000 annually.

With an annual printing expenditure of $1.8 billion, the government was a much more challenging task than his school science project.

Suvir repeated his tests on five sample pages from documents on the Government Printing Office website and got similar results — change the font, save money.

Using the Government Services Administration’s estimated annual cost of ink — $467 million — Suvir concluded that if the federal government used Garamond exclusively it could save nearly 30% — or $136 million per year. An additional $234 million could be saved annually if state governments also jumped on board, he reported.

Gary Somerset, media and public relations manager at the Government Printing Office, describes Suvir’s work as “remarkable.” But he was noncommittal on whether the GPO would introduce changes to typeface, saying the GPO’s efforts to become more environmentally sustainable were focused on shifting content to the Web.

Garamond has been my go-to font for twenty years; goodness knows how much money I’ve saved my employers. But, yes, I save more but operating almost entirely digitally; I just don’t print that much.

Oddly, my first instinct on reading this was to recall Dilbert strip from way back in August of 1996: