School Shootings No Longer Shock Students. It Shouldn’t Be Like This

We have a generation of schoolkids who aren't even surprised when there's a shooting at their school. That's a problem. 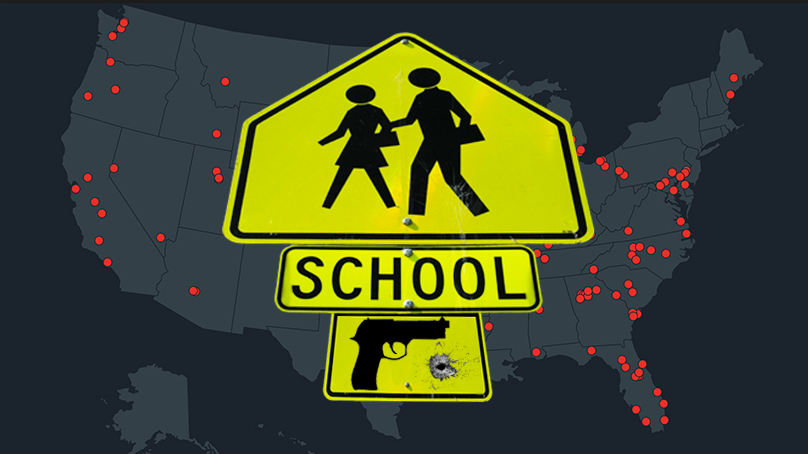 In the wake of last Friday’s shooting at Santa Fe High School that left ten people dead, including nine of students, we’ve seen the usual reactions that we’ve become used to in the wake of these events. One report, though stood out to me, and it came from the words of SFHS students who basically said they were fully expecting that this would happen at her school at some point:

SANTA FE, Tex. — A nation plagued by a wrenching loop of mass school shootings watched the latest horror play out in this small Southeast Texas town Friday morning, as a young man armed with a shotgun and a .38 revolver smuggled under his coat opened fire on his high school campus, killing 10 people, many of them his fellow students, and wounding 10 more, the authorities said.

By the end of the day, a 17-year-old suspect, Dimitrios Pagourtzis — an introvert who had given off few warning signs — had surrendered and been taken into custody. Law enforcement officials said they found two homemade explosive devices left at the school during the rampage.

It was the worst school shooting since the February assault on Marjory Stoneman Douglas High School in Parkland, Fla., where a young man with an AR-15 rifle left 17 people dead and prompted a wave of nationwide, student-led protests calling on lawmakers to tighten gun laws.

It was barely after 7:30 a.m. at Santa Fe High School, about 35 miles southeast of Houston, when gunfire first resounded through the halls, the opening volley of yet another massacre at an American high school that would leave students, teachers and staff members shocked, and in some cases bloodied. But they were not necessarily surprised.

A video interview with one student, Paige Curry, spread across social media, an artifact of a moment when children have come to expect violence in their schools.

“Was there a part of you that was like, ‘This isn’t real, this is — this would not happen in my school?'” the reporter asked.

The young girl shook her head: “No, there wasn’t.”

“Why so?” the reporter asked.

“It’s been happening everywhere,” she said. “I felt — I’ve always kind of felt like eventually, it was going to happen here, too.”

Here’s the video, cured up to start at the relevant point in the interview:

Paige Curry is 17 years old and, by all indications, not any different from any of the other students at her school. What’s utterly depressing about what she says in this interview is the idea that we now live in a country where a teenager felt even before this incident that she had to live with the possibility that, on any given day and probably without sufficient warning, someone, be it a current or former student or someone else, would walk into her school with a weapon, open fire, and put her life and the lives of her friends, teachers, and other students in the crosshairs just as we’ve seen happen in schools from Columbine, Colorado to Newton, Connecticut to Parkland, Florida, and finally, Santa Fe, Texas. From her point of view, it was just a matter of time before it got to her High School, and there’s something about the fact that a teenager has to think that way that chills me to the bone and makes me wonder what kind of world we’ve created.

Many people reading this article will, of course, immediately jump to the easy availability of guns and the need for new restrictions on what weapons people can purchase, what they can purchase, and the steps that they should be required to go through in order to purchase them. Regardless of how you feel about the Second Amendment and the right to keep and bear arms, this is certainly a worthy debate to have, although the truth of the matter is that it often ends up being an unproductive discussion because of the fact people tend to approach this conversation from hardline positions on either side and these discussions far too often end in name-calling and division rather than agreement on any kind of compromise. Speaking for myself, as I have said in the past there are some forms of proposed changes or fixes to laws governing guns that I’m fine with, such as expanded background checks, raising the age limit on gun purchases to 21, and a much better concentration on getting and keeping weapons out of the hands of mentally ill people who are dangers to themselves or others. As for other proposals, such as banning the sale of so-called “assault weapons” or requiring things such as universal registration, mandatory insurance, and other ideas, for reasons I’ve expressed before I remain opposed or at least skeptical that they would have any practical impact, especially since it seems clear from nearly every comment thread, social media discussion, and cable news analysis, it’s basically impossible to have a civil discussion on this topic.

But this post isn’t about guns, gun control, or anything related to that debate, it’s about something more fundamental, namely that we now live in a world where teenagers have come to accept the fact that they are likely to one day have to live through a school shooting. Statistically speaking, of course, this simply isn’t true. There are millions of teenagers and pre-teens in High Schools and Middle Schools in the United States, and millions of more children in elementary school. Even taking recent events into account, the odds that one school or one group of students will be subjected to a mass shooting like Parkland or Santa Fe during their time from Kindergarten through 12th grade is infinitesimal. When you’re dealing with an emotional issue such as this, though, statistics become irrelevant. Putting it quite simply, there’s something very wrong with a culture where kids have come to the conclusion that they might be dead by the end of the day when they wake up in the morning.

I was in public schools from the early 1970s through the mid-1980s, and we certainly didn’t live like this in a community not very different from the ones where the most recent mass shooting events have taken place. Events like what happened at Sandy Hook Elementary, Stoneman Douglas High School, or Santa Fe High School simply didn’t happen back then. Although there were, apparently, some smaller scale events in both the 1970s and 1980s, I don’t recall any of these incidents making the national news at the time. Perhaps we were living in a fantasy world at the time, but the possibility that either I or my fellow students could end up being the victim of a mass shooting, or indeed any shooting, is something that just didn’t enter my mind, and I suspect this is true of most of the people who were in public school at the same time I was. Ever since Columbine at least, and perhaps starting further back after the 1998 shooting at Westside Middle School in Craighead County, Arkansas, that hasn’t been possible. And that’s a problem.

When I began writing this post, I didn’t start out with the idea that I’d be the one who could come up with a solution to this rather obvious problem, so I suppose I shouldn’t be disappointed that I’ve come to the end of it without any idea of where to even begin when having a discussion. Indeed, I’m not certain that there is one single answer to how we can step back from the world we’ve allowed to come into existence for our young people. Certainly, guns and gun control are worth talking about. So are issues such as how we approach mental illness and how we can develop rules that keep weapons out of the hands of people who shouldn’t have them while at this same time ensuring that the rights of patients are protected and that we don’t end up creating a world where people avoid getting needed mental health treatment because they’re being reported to the state. We also need to talk about issues like school security and, yes, “hardening schools” to make it harder for someone to wander onto campus undetected and easier for security on site to deal with any type of shooting situation or other threat should it ever arise. Beyond this, though, it seems to me as though we’ve reached a point where we have to consider whether there’s something culturally wrong and, if there is, I’m not sure how to even begin to identify what that is and, even if when can identify it, how to fix it.

FILED UNDER: Crime, Education, Guns and Gun Control, Law and the Courts, US Politics