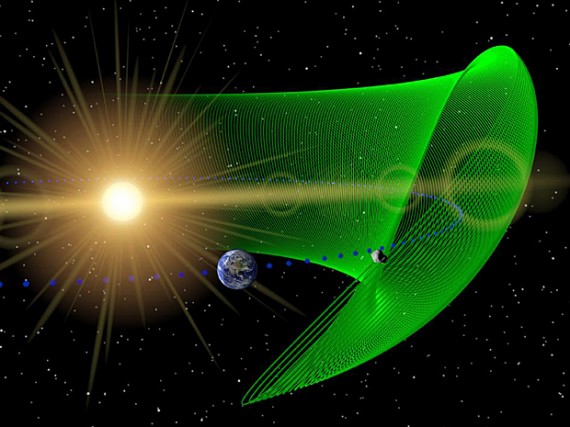 Apparently, Earth isn’t alone in the track it takes in its journey around the Sun:

The moon isn’t the only hunk of space rock that has been travelling around the sun with the Earth for ages.

Canadian scientists have discovered that the Earth is also accompanied by a “Trojan” companion — an asteroid that travels a constant distance ahead of it at all times, sharing nearly the same orbit around the sun.

Similar objects have been found travelling with other planets in our solar system, including Mars, Jupiter and Neptune.

“In a way, these are sort of like secondary moons,” said Martin Connors, the Alberta scientist who led the discovery published in Thursday’s issue of Nature.

“You would think that the gravity of the planet would just like to pull the asteroid in,” said Connors. “But when it does do that, it moves closer to the sun, and then the sun’s gravity makes it go faster, and it pulls away from the planet again.”

It makes you wonder what else is out there, doesn’t it?