Another 6-3 decision along ideological lines.

The Supreme Court ruled on Thursday that California may not require charities soliciting contributions in the state to report the identities of their major donors.

The vote was 6 to 3, with the court’s three liberal members in dissent.

The requirement was challenged by Americans for Prosperity Foundation, a group affiliated with the Koch family, and the Thomas More Law Center, a conservative Christian public-interest law firm. They said it violated the First Amendment’s protection of the freedom of association by subjecting donors to possible harassment.

The disputed measure requires charities to file with the state a copy of an Internal Revenue Service form that identifies major donors. Under federal law, the I.R.S. must keep the form confidential. California also promised to keep the forms secret, but it has not always done so.

According to court papers, the challengers discovered in 2015 that the state had displayed about 1,800 forms on its website. State officials said that the disclosures were inadvertent and promptly corrected and that the state had imposed new security measures.

In the context of elections, the Supreme Court has supported laws requiring public disclosure. In the Citizens United campaign finance decision in 2010, the court upheld the disclosure requirements before it by an 8-to-1 vote. In a second 8-to-1 decision that year, Doe v. Reed, the court ruled that people who sign petitions to put referendums on state ballots do not have a general right under the First Amendment to keep their names secret.

The challengers in the case, Americans for Prosperity v. Bonta, No. 19-251, said the electoral context was different and that charities needed protection given the nation’s volatile political climate. They received support from hundreds of groups across the ideological spectrum, including the Chamber of Commerce, the Cato Institute, the Electronic Frontier Foundation, the American Civil Liberties Union, and the NAACP Legal Defense and Educational Fund.

The U.S. Supreme Court on Thursday sided with rich donors and their desire to remain anonymous against a state law aimed at policing the finances of charities and other nonprofits.

By a 6 to 3 vote along ideological lines, the court struck down California’s law requiring nonprofits to file a list of their large donors with the state. The court said that the law subjected donors to potential harassment, chilling their speech in violation of the First Amendment

In his opinion for the court’s conservative majority, Chief Justice John Roberts said the court was applying exacting scrutiny, not strict scrutiny in analyzing the California measure.

“While exacting scrutiny does not require that disclosure regimes be the least restrictive means of achieving their ends, it does require that they be narrowly tailored to the government’s asserted interest,” he wrote.

In her dissent, Justice Sotomayor wrote: “Today’s analysis marks reporting and disclosure requirements with a bull’s-eye. Regulated entities who wish to avoid their obligations can do so by vaguely waving toward First Amendment ‘privacy concerns.’ … It does not matter if not a single individual risks experiencing a single reprisal from disclosure, or if the vast majority of those affected would happily comply. That is all irrelevant to the Court’s determination that California’s Schedule B requirement is facially unconstitutional. Neither precedent nor common sense supports such a result.”

Even more important could be the effect on federal and state laws that require public disclosure of the names of campaign contributors. In the political context, the Supreme Court has long ruled that such disclosure is constitutional because it serves the important public interest of accountability by disclosing who has skin in the game of influencing government policy. Indeed, public disclosure is perhaps the only remaining check on political contributions, and some political contributors would like to see it eliminated, too. In fact, so too would some members of the Supreme Court’s conservative wing.

Chief Justice John Roberts, who wrote the majority opinion for the court, ruled that California’s “blanket demand” for that information “is facially unconstitutional.”

“When it comes to the freedom of association, the protections of the First Amendment are triggered not only by actual restrictions on an individual’s ability to join with others to further shared goals. The risk of a chilling effect on association is enough,” Roberts wrote for the court.

A district court ruled for the groups, noting that the state has failed in some cases to keep the information private. But a panel of the U.S. Court of Appeals for the 9th Circuit upheld California’s practice.

The Biden administration took a middle-of-the-road approach to the question. It said the requirement should not be found unconstitutional in all applications but that the groups should have another opportunity to prove that the rights of their donors had been violated.

The Supreme Court ruled in 1958 that the NAACP did not have to comply with Alabama’s demand that it list its donors because of the danger that could befall donors if their names were disclosed. But the court has also said that anonymity is not guaranteed in political speech, such as when people sign petitions to put a referendum on the ballot.

“California casts a dragnet for sensitive donor information from tens of thousands of charities each year, even though that information will become relevant in only a small number of cases involving filed complaints,” Chief Justice John Roberts wrote for the court, joined by Justices Clarence Thomas, Samuel Alito, Neil Gorsuch, Brett Kavanaugh and Amy Coney Barrett.

In contrast to campaign-finance disclosure laws, which are intended to inform the public, the charitable-donor disclosures remain confidential and were intended to be seen only by auditors. But in an era where data breaches are commonplace, “assurances of confidentiality may reduce the burden of disclosure to the State, they do not eliminate it,” the court said.

The dissenters accused the majority of hijacking precedents written to protect civil-rights activists under threat in order to hobble supervision of nonprofit activity that bears no comparable risk.

I honestly have no opinion on whether the Majority got it right as a matter of law and precedent. While I have studied quite a bit of the First Amendment and Civil Rights caselaw over the last four decades, this set of facts is outside the scope of my lay knowledge. As a matter of public policy, though, I think they got it right.

To the extent that participating in civic organizations is a matter of Constitutionally protected free association, it seems reasonable that one ought to be able to do so without being required to disclose that fact to the government and to the public record.

My relatively longstanding view was that those who donate to political candidates and parties ought to have to disclose that fact and I continue to believe that there’s a strong public interest in knowing who is funding their political leaders. That interest is much, much less in the case of other organizations. Regardless, in recent years, I’ve reconsidered even the former in that, in today’s climate, it’s certainly plausible that such disclosure would subject people to harassment, even physical harm. 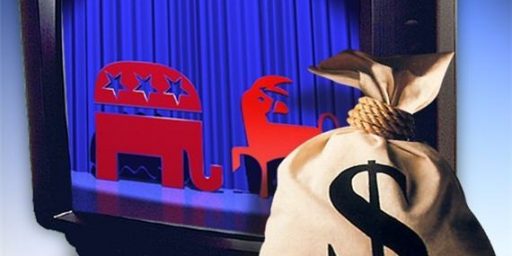