I’ve long disagreed with the blanket statement “Ignorance of the law is no excuse,” thinking that the government had some reasonable duty to make people aware of what the law is. Now, Kevin Drum reports that there are actually federal laws and/or regulations that are so secret that, even if you’re arrested for it, they won’t tell you what they are. Call me a bleeding heart if you must but, somehow, that strikes me as a bad idea.

Orin Kerr has more background on the particular instance that sparked Kevin’s interest, the various regulations enforced by TSA on who may get on commercial airlines and with what. I actually wrote about that one (based on a Slate article) back in September of 2004. 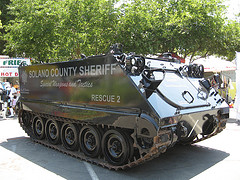 Does the FCC Get A SWAT Team?