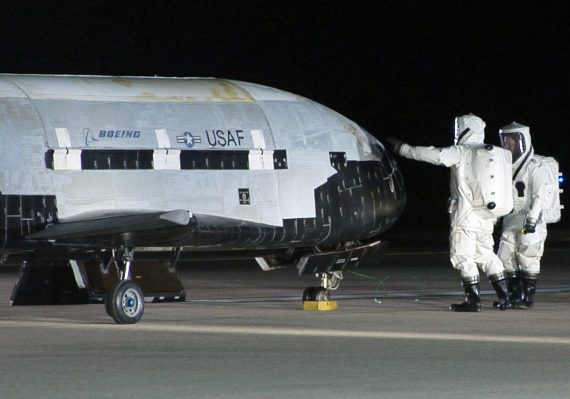 Unknown to most everyone, an unmanned successor to the Space Shuttle returned to Earth yesterday after a mission wrapped in secrecy that lasted more than a year:

The mysterious unmanned mini-space shuttle on a classified mission has finally returned to earth.

It landed early Saturday morning at Vandenberg Air Force Base in California at 5:48 a.m. PDT after weather conditions kept pushing back landing attempts the last few days. The shuttle spent 469 days in orbit.

The Air Force’s X-37B, is an unmanned reusable spacecraft built by Boeing that has spent more than a year on a classified mission in space.

The craft went into orbit on March 5, 2011, but as was the case during its first launch in 2010, very little has been known about its mission or what payloads it might be carrying because its missions are classified.

That has led to speculation that the spacecraft is involved in intelligence gathering operations or the testing of new technologies.In keeping with the scarce mission details for the X-37B, all the Air Force would say in a statement Saturday was that the spacecraft had “conducted on-orbit experiments” during its mission.

Indeed, surveillance was believed to be the vehicle’s purpose back in 2010 during its first mission:

A team of amateur sky watchers has pierced the veil of secrecy surrounding the debut flight of the nation’s first robotic spaceplane, finding clues that suggest the military craft is engaged in the development of spy satellites rather than space weapons, which some experts have suspected but the Pentagon strongly denies.

Last month, the unmanned successor to the space shuttle blasted off from Florida on its debut mission but attracted little public notice because no one knew where it was going or what it was doing. The spaceship, known as the X-37B, was shrouded in operational secrecy, even as civilian specialists reported that it might go on mysterious errands for as long as nine months before zooming back to earth and touching down on a California runway.

In interviews and statements, Pentagon leaders strongly denied that the winged plane had anything to do with space weapons, even while conceding that its ultimate goal was to aid terrestrial war fighters with a variety of ancillary missions.

Now, the amateur sky watchers have succeeded in tracking the stealthy object for the first time and uncovering clues that could back up the surveillance theory. Ted Molczan, a team member in Toronto, said the military spacecraft was passing over the same region on the ground once every four days, a pattern he called “a common feature of U.S. imaging reconnaissance satellites.”

In six sightings, the team has found that the craft orbits as far north as 40 degrees latitude, just below New York City. In theory, on a clear night, an observer in the suburbs might see the X-37B as a bright star moving across the southern sky.

“This looks very, very good,” Mr. Molczan said of the identification. “We got it.”

In moving from as far as 40 degrees north latitude to 40 degrees south latitude, the military spacecraft passes over many global trouble spots, including Iraq, Iran, Afghanistan, Pakistan and North Korea.

Somewhat unusually for such a secretive mission, the Air Force has released video of the landing on Saturday, perhaps an indication that the government is ready to start removing the veil of secrecy from this technology as a way of letting the rest of the world know exactly what we’re capable of: