The Federal government is funding a Pakistan version of Sesame Street for $20 million. 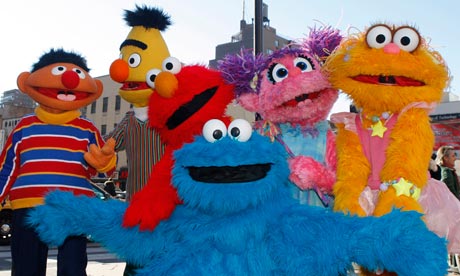 You might have been under the impression that the U.S. Federal Government is broke. P’shaw.

There’s no Cookie Monster, no Big Bird and no Count von Count.

But Pakistani children will soon start experiencing what millions in the west have done for more than four decades – the joys of Sesame Street.

In a $20m (£12m) remake of the classic American children’s programme, the setting for the show has moved from the streets of New York to a lively village in Pakistan with a roadside tea and snacks stall, known as a dhaba, some fancy houses with overhanging balconies along with simple dwellings, and residents hanging out on their verandas.

The Pakistani version, in which characters will speak mostly in Urdu, will feature Rani, a cute six-year-old Muppet, the child of a peasant farmer, with pigtails, flowers in her hair and a smart blue-and-white school uniform. Her curiosity and questions about the world will, it is hoped, make her a role model for Pakistani children.

The financing for the series comes from USAid, the economic assistance arm of the US government, which aims to help the country’s young learn some basic words and numbers through Sesame Street’s fun style of education. Pakistan’s schooling system is failing badly, a major reason for a descent into religious conservatism and economic stagnation.

Elmo, the cheerful monster toddler from the original, will be in the Pakistani version, with new local personality touches. But other American favourites such as Count von Count – a lovable vampire who would rather count telephone rings than answer the phone – will make way for local characters in SimSim Humara (“Ours”), the Pakistani edition.

No word on whether Pakistan Elmo is an essential employee and therefore exempt from the possible government shutdown. Is this an incredibly brazen waste of money? Or a drop in the bucket well spent? The second, quite likely:

“The idea is to prepare and inspire a child to go on the path of learning, and inspire the parents of the child to think that the child must be educated,” said Faizaan Peerzada, the chief operating officer at the Lahore-based Rafi Peer Theatre Workshop, which was awarded the commission for the project in collaboration with Sesame Workshop, the creator of the American show. “This is a very serious business, the education of the children of Pakistan at a critical time.”

The show will have strong female characters and carry an implicit message of tolerance but will feature no pro-American propaganda or overt challenge to hardline religious sentiment. Under Barack Obama, US civilian assistance to Pakistan has tripled to $1.5bn a year but the money does not seem to have made much obvious impact. The Pakistani Sesame Street could turn out to be the most visible American aid project in Pakistan in recent years.

I haven’t the foggiest whether a Pakistani Sesame Street will succeed in transforming the culture on matters of gender equality or literacy. But, given that we’re pouring hundreds of billions of dollars into the region, I’m willing to risk $20 million to find out.