Newsweek has an interesting cover story this week: 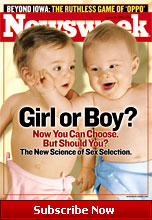 The brave new world is definitely here. After 25 years of staggering advances in reproductive medicine–first test-tube babies, then donor eggs and surrogate mothers–technology is changing baby-making in a whole new way. No longer can science simply help couples have babies, it can help them have the kind of babies they want. Choosing gender may obliterate one of the fundamental mysteries of procreation, but for people who have grown accustomed to taking 3-D ultrasounds of fetuses, learning a baby’s sex within weeks of conception and scheduling convenient delivery dates, it’s simply the next logical step. That gleeful exclamation, “It’s a boy!” or “It’s a girl!” may soon just be a quaint reminder of how random births used to be.

The ability to create baby Jack or baby Jill opens a high-tech can of worms. While the advances have received kudos from grateful families, they also raise loaded ethical questions about whether science is finally crossing a line that shouldn’t be crossed. Even fertility specialists are divided over whether choosing a male or female embryo is acceptable. If couples can request a baby boy or girl, what’s next on the slippery slope of modern reproductive medicine? Eye color? Height? Intelligence? Could picking one gender over the other become the 21st century’s form of sex discrimination? Or, as in China, upset the ratio of males to females? Many European countries already forbid sex selection; should there be similar regulations in the United States?

It amazes me that a society can be so dedicated to “choice” that it serves as the rationale for the aborting of thousands of fetuses a year but yet gets so hysterical over comparatively benign options.

Are male babies so obviously desirable that parents would choose them so overwhelmingly that we’d have an inadequate supply of girl babies? That’s seems amazingly unlikely to me. It’s true that in an agrarian society there’s some advantage to male offspring as free farm labor. There’s even a slight incentive that, if a couple only has one child, that is be male so that the family line continues on. But I’d guess that most families that have a second child would prefer to have a girl to “have one of each.” And, if boys started to suddenly outnumber girls in the baby pool, one would think the prestige of girls would shoot up and counterbalance it. Further, one could argue that a slight preference for male children counterbalances trends in society that otherwise conspire to create an overbalance of females. Young males die in accidents, wars, and the like at a rate far disproportionate to women. Women also outlive men, creating an imbalance amount the senior set.

As to height, eye and hair color, intelligence, and the like, why not allow choice? With the exception of trying to find work as a jockey, there are few advantages to being of short stature. Similarly, one would think the ability to create children of higher intelligence would be a good thing. The job prospects of the sub-100 IQ cohort are getting progressively worse. Why not eliminate the creation of a heritable underclass?

When in vitro fertilization was developed in the late 1970s–when the news media referred to the result as “test tube babies”–there was all sort of hysteria. Nonsense about “playing God” and the like. We’ve adjusted nicely and now thousands of couples who had been unable to have children of their own, can. That’s a good thing.

Nature produces flaws. Technology has helped correct some of those flaws over the years. We’ve cured many a disease, vastly improved surgical techniques to repair birth defects and later-in-life malfunctions, created mechanical devices to improve defective eyes, ears, and limbs. We even have plastic surgery to make people prettier. What’s so different about this?