My new book (for which I am an editor and contributor) came out last week:  30-Second Politics.

It written for a general audience and includes a series of very short articles (50 plus some bios) defining major regime types and other concepts linked to government and politics.

I wrote about a quarter of the entries and the other major contributors (10 entries each)were:

The books was produced in conjunction with Barnes and Noble and so is currently only available through them.  Other books in the series are at Amazon, so I assume it will end up there at some point.

I have not yet received a hard copy, but the PDFs looked great. 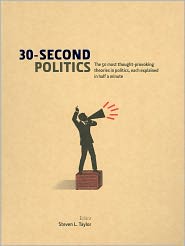