The legendary Civil War historian Shelby Foote has died at the age of 88. 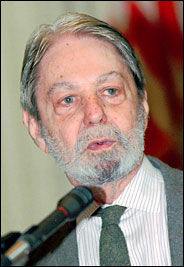 The Mississippi native and longtime Memphis resident wrote a stirring, three-volume, 3,000-page history of the Civil War, as well as six novels. ”He had a gift for presenting vivid portraits of personalities, from privates in the ranks to generals and politicians. And he had a gift for character, for the apt quotation, for the dramatic event, for the story behind the story,” said James M. McPherson, a Pulitzer Prize-winning Civil War historian. ”He could also write a crackling good narrative of a campaign or a battle.”

On Burns’ 11-hour PBS series ”The Civil War,” Foote became an immediate hit with his encyclopedic knowledge of the war, soft Southern accent and easy manner. With his gray beard and gentlemanly carriage, he seemed to have stepped straight out of a Mathew Brady photograph.

Though a native Southerner, Foote did not favor South in his history or novels and was not counted among those Southern historians who regard the Civil War as the great Lost Cause. He publicly criticized segregationist politicians and abruptly abandoned a move to the Alabama coast in the 1960s because of the racist attitudes he found there. ”He was a Southerner of great intellect who took up the issue of the Civil War as a writer with huge sanity and sympathy,” said Pulitzer Prize-winning novelist Richard Ford, a friend and fellow Mississippi native.

Foote attended the University of North Carolina for two years and served in World War II, though he never saw combat.

That same year, Random House asked him to write a single-volume history of the Civil War. He took the job, but it grew into a three-volume project finally finished in 1974. In 1999, the Modern Library ranked Foote’s ”The Civil War: A Narrative” as No. 15 on its list of the century’s 100 best English-language works of nonfiction.

His final novel, ”September, September,” published in 1978, tells the story of an ignorant white couple who kidnap the son of a rich black businessman in the 1950s. It became the basis for a TV move starring fellow Memphis resident Cybill Shepherd.

During World War II, he was an Army captain of artillery until he lost his commission for using a military vehicle without authorization to visit a female friend and was discharged from the Army. He joined the Marines and was still stateside when the war ended.

An amusing anecdote. I’d have loved to hear Foote tell that tale. Like many Southern authors, he was a great raconteur.