The inanity that is Black Friday took a new turn in California last night:

Matthew Lopez went to the Wal-Mart in Porter Ranch on Thursday night for the Black Friday sale but instead was caught in a pepper-spray attack by a woman who authorities said was “competitive shopping.”

Lopez described a chaotic scene in the San Fernando Valley store among shoppers looking for video games soon after the sale began.

“I heard screaming and I heard yelling,” said Lopez, 18. “Moments later, my throat stung. I was coughing really bad and watering up.”

Lopez said customers were already in the store when a whistle signaled the start of the Black Friday sale at 10 p.m., sending shoppers hurtling in search of deeply discounted items.

Lopez said that by the time he arrived at the video games, the display had been torn down. Employees attempted to hold back the scrum of shoppers and pick up merchandise even as customers trampled the video games and DVDs strewn on the floor.

“It was absolutely crazy,” he said.

Another customer said screams erupted after about 100 people waiting in line to snag Xbox gaming consoles and Wii video games got into a shoving match.

Alejandra Seminario, 24, said she was waiting in line to grab some toys at the store around 9:55 p.m. when people the next aisle over started shouting and ripping at the plastic wrap encasing gaming consoles, which was supposed to be opened at 10 p.m.

“People started screaming, pulling and pushing each other, and then the whole area filled up with pepper spray,” the Sylmar resident said. “I guess what triggered it was people started pulling the plastic off the pallets and then shoving and bombarding the display of games. It started with people pushing and screaming because they were getting shoved onto the boxes.”

Peace on Earth, Goodwill Toward Men, and all that stuff. 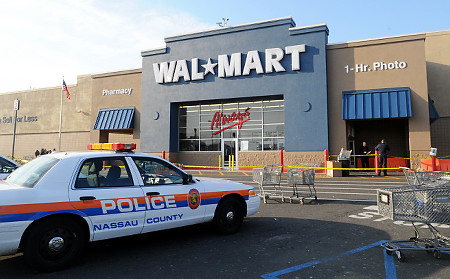