Should We Eliminate The Vice-Presidency?

Does the office of Vice-President serve any useful purpose anymore? 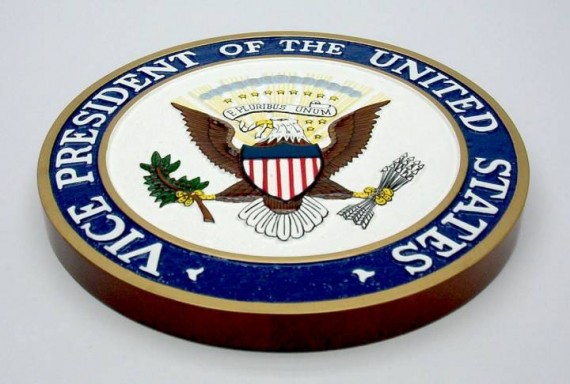 Responding in part to my post about the seemingly weak Democratic bench for Vice-President, Seth Mandel at Commentary suggests its time to get rid of the office of Vice-President entirely:

We don’t need to agonize over how we choose the vice president. We can free ourselves by getting rid of the vice presidency altogether. First and foremost, the vice presidency has strayed-and actually, it did so almost from the very beginning-from the Founders’ idea of the position, which they weren’t exactly wild about to start with. As Arthur Schlesinger wrote in his 1974 Atlanticessay:

The vice presidency was put into the Constitution for one reason, and one reason alone. Hugh Williamson of North Carolina, a member of the committee that originated the idea, conceded at the Convention that “such an office as vice-president was not wanted. It was introduced only for the sake of a valuable mode of election which required two to be chosen at the same time.” This is an essential but neglected point. The theory of presidential elections embodied in the Constitution was that if electors had to vote for two men without designating which was to be President and which Vice President, and if one of these men had, as the Constitution required, to be from another state, then both men who topped the poll would be of the highest quality, and the republic would be safe in the hands of either. …

In 1800 the Republicans gave the same number of electoral votes to Jefferson, their presidential choice, as they gave to Aaron Burr, a man of undoubted talents who, however, was trusted by no one in the long course of American history, except his daughter Theodosia and Gore Vidal. Burr was nearly chosen President, though the voters never intended him for the presidency. The fear of comparable slipups in 1804 led to the adoption of the Twelfth Amendment requiring the electoral college to vote separately for President and Vice President.

The abolition of the “valuable mode of election” canceled the purpose of the Founding Fathers in having a Vice President at all.

Indeed it did. What’s frustrating about the evolution of the vice presidency is that it was not only predictable but predicted. All throughout American history politicians and commentators offered nothing toward the office but acid and pity. (Schlesinger’s own article begins: “We have a Vice President again, and Mr. Ford deserves all our sympathy.”)

So who would replace the vice president in the line of automatic succession? Anyone else would possess less electoral legitimacy than the current vice president unless it was a leader of one of the houses of Congress, in which case upon presidential vacancy the high office could switch parties without an election, an outcome that should be avoided.

Perhaps someone-the secretary of state, say-could take over on a provisional basis while a national election could be organized. Ideally they would not be considered “president,” but that has its own drawbacks: could they sign bills or treaties? The following election would have to take place relatively soon, which means a brief nominating and general-election period. But that has advantages. After all, we have the opposite now, and we’re left filling time and space by talking, regrettably, about vice-presidential nominees.

Mandel is correct that, at least as far as the Constitution is concerned, there seems to be very little point to the Vice-Presidency. Outside of succeeding to the office if a President dies in office or resigns, or doing so on a theoretically temporary basis pursuant to the provisions of the 25th Amendment, and breaking ties in the Senate there really isn’t much that a Vice-President has to do. Indeed, it’s only been relatively recently in the history of the United States that Vice-Presidents have taken on a prominent role in Presidential Administrations or been considered to be of anything other than passing interest during the course of a Presidential campaign. All of those additional duties that Vice-Presidents have today, though, exist solely at the discretion of the President who could, at any time, decide that he really doesn’t want his Vice-President doing much of anything. At its roots, the Vice-Presidency is a powerless institution, and that was as true under the Constitution as originally drafted as it is today. Given that, it does seem at times like an unnecessary institution, but that strikes me as a superficial way of looking at things.

For example, Mandel’s colleague Jonathan Tobin points out that the office played an important role in the early years of the Republic:

The gravest doubts about the survival of the American political experiment in its earliest years often centered on the question of legitimacy and succession. Would a president, especially one like George Washington, who was the idol of the country, ever willingly step down and lay the foundation for the future of democracy rather than have the republic quickly lapse into tyranny or monarchy as most previous such experiments had done? Would an incumbent that was defeated for reelection choose to peacefully hand over the government to his opponents?

Washington and Adams answered those questions in the affirmative to their everlasting honor. But still unanswered was the question as to what would happen if a president died? Would there be chaos? Would the government be at a standstill until a new election could be held? Having a vice president who was already voted into office by the same Electoral College created a stable process that kept the system from running off the rails in the event of a calamity. Indeed, when William Henry Harrison, the first president to die in office, passed away a month after his inauguration there were doubts about what would happen. But John Tyler slid neatly into Harrison’s place and the republic survived with no apparent trouble. The same has happened every time since then when America found itself with an accidental president.

Had there been no Vice-President in 1841, then the Presidency would have gone to the President Pro Tempore of the Senate under the Presidential Succession Act in force at the time,  a man named Samuel Southard from New Jersey.   I have no idea what kind of politician Mr. White was, but as Tobin points out, he would have lacked the kind of national legitimacy that someone who was elected on the same ticket as the President himself arguably has. As it was there were questions at the time about whether or not Tyler was “really” the President when he succeeded Tyler, those questions were answered in the affirmative in no small part due to the fact that Tyler had been nationally elected rather than just having been appointed by the legislature of a single state. In its first real test, the Vice-Presidency fulfilled the role that the Founders had intended for it and it has done so on seven other occasions in American history. For that reason alone, it seems to me that the institution has proven its utility.

Finally, it doesn’t strike me that the Vice-Presidency, or the selection of a Vice-Presidential running mate during the course of a Presidential campaign pose a big enough distraction for American politics to justify the kind of serious Constitutional change that eliminating the office would require. If there were no Vice-President, then we’d have to come up with some new rules about Presidential succession, for example. As long as there are an even number of states, we’d have to figure out how to deal with the possibility of tie votes in the Senate. Both of these would require detailed Amendments to the Constitution that would be, at best, in terms of their effectiveness. On the downside, there are very few examples in history that one can point to of Vice-Presidents that were actually harmful. Aaron Burr would certainly seem to qualify, although the worst of his contributions to history came after he was dumped from the 1804 re-election ticket. Spiro Agnew certainly belongs on the list because of his forced resignation, although the activities that led to that occurred prior to the 1968 Election. And many people would put Dick Cheney on the list, although its worth noting that Cheney’s influence in the Bush Administration declined significantly during Bush’s Second Term, and that it doesn’t appear that the two men parted company on the best of terms. Three bad examples out of 47 Vice-Presidents over the course of 225 years doesn’t strike as a reason for radical changes, though.

The vast majority of our Vice-Presidents have been rather forgettable characters, and that’s likely to be true of the men and women that follow them in that office in the years to come. However, as John Adams said “I am Vice President. In this I am nothing, but I may be everything.” For that reason alone, it strikes me that its worth keeping the office around.

FILED UNDER: Presidency, US Politics, Vice-President