Should We Ignore the Terrorists?

Should we treat terrorists as trolls? 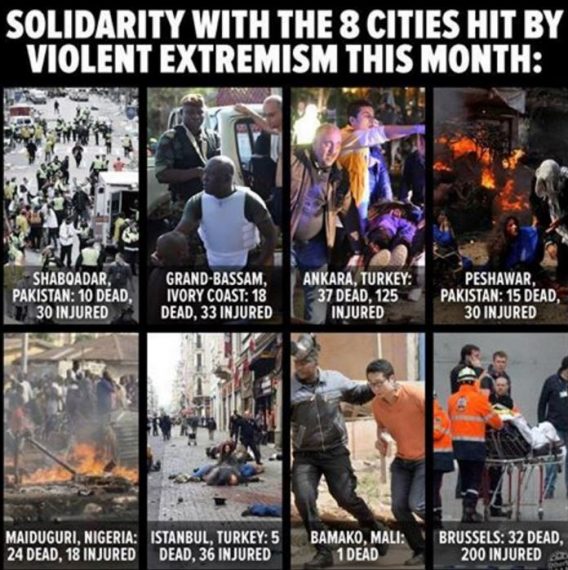 Charli Carpenter reflects on media and social media coverage of the spate of recent attacks by the Islamic State and argues:

She makes these arguments despite herself feeling especially at risk, as the mother of a teenage son who routinely travels internationally to play soccer and is therefore more likely to be a victim than the average American.

This is not a novel argument and, indeed, one that I’ve frequently discussed with my students. Statistically, as Carpenter rightly notes, Americans are far more likely to be killed doing all manner of mundane things—or by deranged Americans with easily-acquired firearms—than they are by Islamist terrorists. And, if our sole aim is to save lives, there are far, far more efficient ways to spend our tax dollars than hunting down IS.

But this all ignores basic human psychology.

While victims in Pakistan and Ivory Coast are, of course, just as worthy of grief as those in Paris or Brussels, Americans are quite naturally going to be more shocked by the latter. While we’re much more diverse a society than we were even in my youth, we still feel much more kinship with Western Europe than South Asia or West Africa. And, while I’m somewhat bemused that we consider the Brussels attacks slightly more tragic now that we know at least two Americans were among the victims, it’s a perfectly human reaction.

Similarly, while it’s essential to keep the relative risk of terrorism in perspective, human beings quite naturally treat the risk of being hit by lightning, dying in an automobile crash, or being murdered by terrorists quite differently. One is a freak act of nature that’s largely unpredictable. One is an increasingly necessary risk that can be mitigated in a variety of ways. One is a barbaric act of human agency.

We quite naturally want to do something about terrorism. First, because it’s a variable risk.  Hardening targets and going after perpetrators can both actually make people safer, even if overreaching can make us less free and less safe. Second, because our sense of justice demands that we take action against evil.

Recognizing those human realities–and the calculus that they impose on the humans we elect to make public policy—doesn’t, of course, require that we act stupidly. Carpenter is certainly right about the effects of overreaction:

That’s what DAESH wants. It makes them feel big, scary, significant. It earns them recruits. It increases fear of Muslims by Westerners, which fuels policies foreclosing escape routes from DAESH-controlled areas, thus raising DAESH’s tax revenue. And that’s what people do when they make a spectacle of DAESH’s terror events to the exclusion of all else, slap “State Department Travel Warnings” on entire regions based on super-low-risk anomalies, declare all-out war on Muslims like some would-be politicians to whose remarks I refuse to link.  All this makes my son less safe by increasing the reach and power of DAESH by spreading fear of what they do.

Nor do I disagree with her ultimate conclusion:

What limits DAESH’s power and makes my child – and your children – safer? Doing what I do (and what Juan Cole recommends): recognizing that we and most Muslims are in the anti-DAESH fight together, speaking in solidarity with DAESH victims everywhere, and generally pointing out that these attacks demonstrate DAESH’s weakness, not its strength.

Despite the horrible rhetoric coming from some on the campaign trail this cycle, that’s largely what we have done. Despite some epic mistakes in the handling of the Global War on Terror, President George W. Bush took great pains—and substantial political risk—to repeatedly emphasize that the United States was not at war with Islam and that, indeed, we were in solidarity with the vast number of Muslims. President Barack Obama has continued that theme, even while prosecuting the GWOT while eschewing the name. Judging by campaigns and polling both here and in Europe, that message is not resonating particularly well. The terrorists are indeed winning in that regard.