Some interesting developments in Pyongyang. 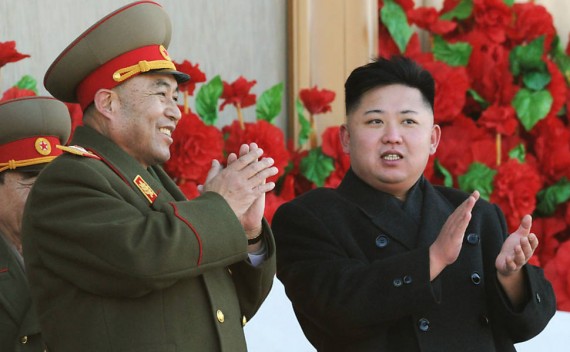 Earlier this week, I noted that the Vice Marshal Ri Yong-ho, a powerful member of the North Korean military who had been seen at Kim Jong-Un’s throughout the transition of power into his hands and thereafter had mysteriously resigned for “health reasons.” Several days later, along with appointment of a successor to Ri, Kim Jong-Un was given the title Marshal, thus making him the highest-ranking military official in the nation. Now, Reuters is out with a report disclosing some of the possible reasons for the political reforms that have taken place in such a short period of time:

BEIJING (Reuters) – Impoverished North Korea is gearing up to experiment with agricultural and economic reforms after young leader Kim Jong-un and his powerful uncle purged the country’s top general for opposing change, a source with ties to both Pyongyang and Beijing said.

The source added that the cabinet had created a special bureau to take control of the decaying economy from the military, one of the world’s largest, which under Kim’s father was given pride of place in running the country.

The downfall of Vice Marshal Ri Yong-ho and his allies gives the untested new leader and his uncleJang Song-thaek, who married into the Kim family dynasty and is widely seen as the real power behind the throne, the mandate to try to save the battered economy and prevent the secretive regime’s collapse.

The source has correctly predicted events in the past, including North Korea’s first nuclear test in 2006 days before it was conducted, as well as the ascension of Jang.

The changes could herald the most significant reforms by the North in decades. Previous attempts at a more market driven economy have floundered, most recently a drastic currency revaluation in late 2009 which triggered outrage and is widely believed to have resulted in the execution of its chief proponent.

“Ri Yong-ho was the most ardent supporter of Kim Jong-il’s ‘military first’ policy,” the source told Reuters, referring to Kim Jong-un’s late father who plunged the North deeper into isolation over its nuclear ambitions, abject poverty and political repression.

The biggest problem was that he opposed the government taking over control of the economy from the military, the source said, requesting anonymity to avoid repercussions.

The most interesting development may be the possibility that civilian authorities in Pyongyang are attempting wrest control of the state away from the military:

North Korea’s cabinet has created a “political bureau” designed to wrest power from the 1.2 million-strong military in order to run the economy, which has been in shambles after a crippling famine in the 1990s, the source said.

“In the past, the cabinet was empty with no say in the economy. The military controlled the economy, but that will now change,” the source said.

Kim Jong-un has set up an “economic reform group” in the ruling Workers’ Party to look at agricultural and economic reforms, the source said, adding that North Korea will learn from its giant neighbor and solitary benefactor, China.

Beijing leaders are thought to have been  pressing Pyongyang to do more to reform the economy, worried that a collapse of the North could send refugees streaming across its border, and cause the loss of a strategic buffer to South Korea and the large contingent of U.S. troops which help protect it.

The New York Times, meanwhile, reports that Kim has stripped the military of a privilege that had been a huge generator of cash:

SEOUL, South Korea — The North Korean leader Kim Jong-un has begun stripping his country’s powerful military of its lucrative export rights in a bold attempt intended to both rejuvenate its staggering economy and curtail top generals’ influence, according to a Seoul-based Web site run by defectors from North Korea.

Although it is impossible to confirm most information about isolated North Korea, there have been hints that Mr. Kim might be unhappy with the stewardship of parts of the economy. In a speech distributed by the state news media in April, he said he intended to keep a tighter control on minerals exports, some of which analysts believe are controlled by the military.

“Some people are now attempting to recklessly exploit the country’s valuable underground resources on the excuse of earning foreign currency by exporting them,” he said, without mentioning who the culprits were.

In addition, South Korean news media this week quoted unidentified government sources who said an apparent fight over the military’s hold on important exports might have been behind this week’s dismissal of a top army official, Ri Yong-ho.

South Korean officials and analysts said it was too early to tell whether Mr. Kim’s reported plan to deprive the military of its ability to earn foreign currency, even if true, was a precursor for wider-ranging changes to North Korea’s ailing economy or just a means of taming the military.

Now,  let’s make no mistake about it here. None of this means that Kim Jong-Un or the non-military political leadership are suddenly good guys. To a large degree, they are doing this principally for the purpose of maintaining their hold on power. If that means liberalizing the economy and cultural changes such as allowing women to have more freedom than they’ve had in the past, that’s what it means. The purpose, however, remains the same. It’s all very Chinese actually, since it seems very familiar, at least in these vague out lines to the reforms that the Chinese began implementing under Deng Xioping. The Chinese, of course, are concerned with stability, not freedom, and it’s quite probable that they’re giving similar advice to their North Korean clients.

This isn’t just crazy talk. A lot of Asian communist parties at this point can point to economic reforms that enriched Party cadres and left the Reds firmly in political control; that has to look good to many of the people around the new Kim.

China would very much like for such economic reform to succeed—Beiijing has been pressing for some for years and is likely to reward any steps by North Korea in this direction.

But nothing in the Democratic People’s Republic of North Korea is ever as simple as it seems, and the Kim family has a long history of choosing control over growth. Like the Castro brothers, who have been talking about economic reforms since 1990 while doing as little as possible to change the system that keeps them on top, the DPRK leadership might just be making noise.

They might, or they might have gotten the message from Beijing that they need to reform their economy before it collapses and the Korean Peninsula becomes an international crisis point once again. Hopefully, for the sake of the North Korean people Kim will decide, as Mead says, that he’s more likely to stay in power if he opens up the economy and reforms agriculture than if he continues to build up the military. It’s not much, but every little bit helps.