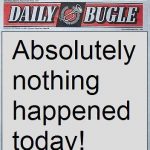 Apparently having nothing better to talk about in the world today, Mother Jones‘ David Corn devotes 878 words today to a weird conspiracy theory promulgated by some Israeli you’ve never heard of:

[H]ere’s the mother of all right-wing conspiracy theories: Obama is scheming to bring tens of millions of Muslims—perhaps up to 100 million—from the Middle East into the United States in order to turn this country into an Islamic nation by the end of his second term.

Fortunately, this diabolical plan has been exposed by an American-born Israeli named Avi Lipkin, who says he once was a translator for the Israeli government, and an outfit called Special Guests, which books conservative commentators and advocates on popular television and radio talk shows….

“According to Arabic language broadcasts intercepted and interpreted by Lipkin and his team, ‘The Moslem world is saying that President Obama wants amnesty for the current Hispanic 12 million illegal immigrants in the US in order to pave the way for the next wave of tens of millions of illegals from the Middle East to the United States, leading to 50 to 100 million Muslims living in the US before the end of Obama’s second term, which will be brought forth by these new US citizens voting for their savior, Obama.'”

The piece (which seems to think it’s been composed in the archest of tones) ends with Corn openly acknowledging Lipkin’s fringe status. Which leads one to wonder: Why was this story worth what must have been a considerable chunk of Mother Jones‘ Washington Bureau chief’s morning to write? Mother Jones obviously thinks it’s important; it’s included in their home page’s autoscrolling top five — right after Saif Qaddafi.

Obviously some random Birther overseas peddling a story about what some unidentified Muslims might think is one of the handful of the most important stories of the day. Or perhaps it’s the tenuous connection Corn draws between Lipkin to a whole host of prominent conservatives….