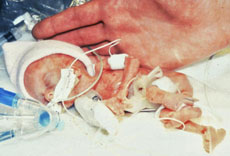 The tiniest premature baby ever known to survive is now a 15-year-old honours student who plays the violin, doctors say. Madeline Mann was born 27 weeks into her mother’s pregnancy, weighing 280 grams or 9.9 ounces. At 25 centimetres long, she was smaller than a football. The doctors who reported the birth say to their knowledge, her birth weight remains the lowest in the medical literature for a child who went on to survive.

They say several factors were in Madeline’s favour. First of all, she is a girl, and premature girls tend to have a better prognosis than boys. Secondly, earlier preterm newborns with higher weights have survived, including some born at 22 weeks of pregnancy. (A normal human pregnancy lasts 38 weeks.) “These extremely low-birth-weight, ‘miracle’ newborns can propagate false expectations for families, caregivers, and the medico-legal community alike,” her doctors warned in a letter appearing in Thursday’s issue of the New England Journal of Medicine.”Gestational age and female sex are critical characteristics in newborns at the threshold of viability.”

Sure. Still, this is remarkable. And that threshold is constantly moving.