Smugglers are getting over and through Trump's border wall with material you can buy at your local Home Depot.

Newly constructed pieces of President Trump’s border wall are apparently being made irrelevant by smugglers armed with $100 chain saws that can be purchased at Home Depot:

SAN DIEGO — Smuggling gangs in Mexico have repeatedly sawed through new sections of President Trump’s border wall in recent months by using commercially available power tools, opening gaps large enough for people and drug loads to pass through, according to U.S. agents and officials with knowledge of the damage.

The breaches have been made using a popular cordless household tool known as a reciprocating saw that retails at hardware stores for as little as $100. When fitted with specialized blades, the saws can slice through one of the barrier’s steel-and-concrete bollards in minutes, according to the agents, who spoke on the condition of anonymity because they were not authorized to speak publicly about the barrier-defeating techniques.

After cutting through the base of a single bollard, smugglers can push the steel out of the way, creating an adult-size gap. Because the bollards are so tall — and are attached only to a panel at the top — their length makes them easier to push aside once they have been cut and are left dangling, according to engineers consulted by The Washington Post.

The taxpayer-funded barrier — so far coming with a $10 billion price tag — was a central theme of Trump’s 2016 campaign, and he has made the project a physical symbol of his presidency, touting its construction progress in speeches, ads and tweets. Trump has increasingly boasted to crowds in recent weeks about the superlative properties of the barrier, calling it “virtually impenetrable” and likening the structure to a “Rolls-Royce” that border crossers cannot get over, under or through.

The smuggling crews have been using other techniques, such as building makeshift ladders to scale the barriers, especially in the popular smuggling areas in the San Diego area, according to nearly a dozen U.S. agents and current and former administration officials.

Mexican criminal organizations, which generate billions of dollars in smuggling profits, have enormous incentive to adapt their operations at the border to new obstacles and enforcement methods, officials say.

The U.S. government has not disclosed the cutting incidents and breaches, and it is unclear how many times they have occurred. U.S. Customs and Border Protection declined to provide information about the number of breaches, the location of the incidents and the process for repairing them. Matt Leas, a spokesman for the agency, declined to comment, and CBP has not yet fulfilled a Freedom of Information Act request seeking data about the breaches and repairs. The U.S. Army Corps of Engineers, which oversees the private contractors building the barrier, referred inquires to CBP.

One senior administration official, who was not authorized to discuss the breaches but spoke on the condition of anonymity, said they amounted to “a few instances” and that the new barrier fencing had “significantly increased security and deterrence” along sections of the border in CBP’s San Diego and El Centro sectors in California.

Current and former CBP officials confirmed that there have been cutting breaches, but they said the new bollard system remains far superior and more formidable than any previous design.

In the San Diego area, smugglers have figured out how to cut the bollards and return them to their original positions, disguising the breaches in the hope that they will go unnoticed and can be reused for repeated passage. Agents said they have learned to drive along the base of the structure looking for subtle defects, testing the metal by kicking the bollards with their boots.

If damage is detected, welding crews are promptly sent to make fixes. The smugglers, however, have returned to the same bollards and cut through the welds, agents say, because the metal is softer and the concrete at the core of the bollard already has been compromised. The smugglers also have tried to trick agents by applying a type of putty with a color and texture that resembles a weld, making a severed bollard appear intact.

Agents in California and Texas said smuggling teams have been using improvised ladders to go up and over the barriers, despite the risk of injury or death from falling; the tallest barriers are approximately the height of a three-story building. Some of the smugglers deploy lightweight ladders made of rebar, using them to get past the “anti-climb panels” that span the top of the barrier.
Once the lead climber reaches the top, agents say, they use hooks to hang rope ladders down the other side.

The rebar ladders are popular because the metal support rods are inexpensive and are skinny enough to pass through the four-inch gaps between the bollards, making it possible for the smuggling teams to use them to scale the secondary row of fencing, according to agents. Rebar, easily purchased at hardware stores, typically is used within concrete as reinforcement.

President Trump claims to not be concerned:

After years of touting the impenetrability of a border wall, President Donald Trump said Saturday that “you can cut through any wall” as reports surfaced of smugglers sawing through newly erected barriers with readily available power tools.

“We have a very powerful wall. But no matter how powerful, you can cut through anything, in all fairness. But we have a lot of people watching. You know cutting, cutting is one thing, but it’s easily fixed. One of the reasons we did it the way we did it, it’s very easily fixed. You put the chunk back in,” Trump told reporters at the White House.

A Washington Post report published Saturday said smugglers have repeatedly sawed through newly built sections of the wall using a widely available cordless reciprocating saw that costs as little as $100. Gangs are also using makeshift ladders to scale the barriers, the Post reported.

Trump’s statement is a far cry from years of campaigning that a border wall would be nearly impossible for smugglers to overcome. In a visit to one of the construction sites in September, Trump said the border wall is “virtually impenetrable” and could not be climbed.

The fact that smugglers, particularly drug smugglers, have found a way to get through, or over the new border wall is hardly surprising. The financial incentives for them to do so are quite high, and contrary to what the President may want us and his supporters to believe, there is no such thing as a completely impenetrable wall. Every time a government has sought to build a wall, whether to keep people out or keep people in, someone has managed to find a way through, around, or over it, and that’s even doubly true when there is money involved as there obviously is in the case of drug smuggling and, sadly, human traffickers. Additionally, for those people who are crossing borders looking for a better life for themselves or their family the incentives to get past border obstacles. or around them, is rather obvious.

To be fair, the wall when completed is supposed to have some form of electronic monitoring that would alert Border Patrol agents when someone is attempting to breach the wall. That surveillance is not currently in place. However, unless the response by agents is instantaneous or nearly so, it’s likely that those trying to get around, atop of, or through the structure will be long gone by the time agents show up. It’s also likely that those seeking to get past the wall will find ways to disrupt the electronic surveillance. Therefore, while Trump’s wall might stop some people from getting across in certain areas it isn’t going to stop it altogether. And, oh yea, Mexico isn’t going to pay for it. 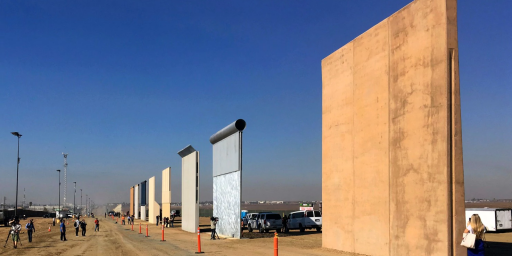