So Far, Trump’s Economy Is Doing Worse Than Obama’s

President Trump likes to take credit for the state of the economy, but the truth is that things are actually doing slightly worse under his Administration than they were under his predecessor. 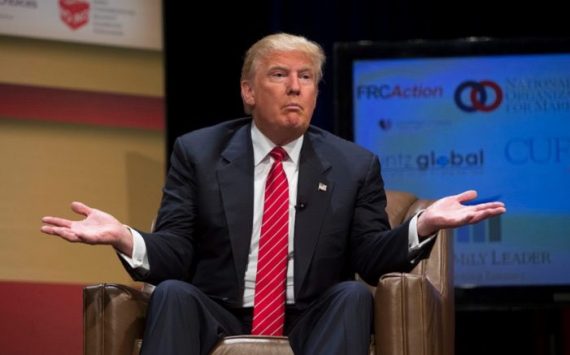 President Trump has made the economy so much better that it has added 186,000 fewer jobs in his first seven months than it did in President Barack Obama’s last seven months.

Indeed, the economy added only a disappointing 156,000 jobs in August and a disappointing 41,000 fewer jobs than we thought it had in June and July, and saw the share of 25- to 54 year-olds who should be in the prime of their working years who are in fact doing so fall a — here’s that word again — disappointing 0.3 percentage points, erasing almost all of its progress since the start of the year. Oh, and wages aren’t going up any faster; pay is growing the same 2.5 percent a year it was when Trump took office.

It shouldn’t be surprising that the economy isn’t doing any better under Trump, since Trump really hasn’t done anything to make it better. There hasn’t been a dollar of new infrastructure spending, let alone the trillion that Trump’s since-departed ideological consigliere Steve Bannon promised. And despite the administration’s tax cut bravado, it’s looking pretty iffy whether it will get that done either. (That’s because Trump wants, more than anything, to cut corporate taxes, but, due to legislative rules, even a temporary corporate tax cut has to be paid for — and Republicans don’t agree on any way to do that.)

The economy, then, is still just chugging along as it has been for the last six years now. Nothing has changed. Even the relatively weak numbers in August are probably just a blip rather than the beginning of something bad. What those do tell us, though, is that there are still quite a few more people who want to work than you’d think there would be when the unemployment rate is only 4.4 percent. Which is to say that the recovery still has some room to run.

The economy, then, is still just chugging along as it has been for the last six years now. Nothing has changed. Even the relatively weak numbers in August are probably just a blip rather than the beginning of something bad. What those do tell us, though, is that there are still quite a few more people who want to work than you’d think there would be when the unemployment rate is only 4.4 percent. Which is to say that the recovery still has some room to run.

It’s not surprising, of course, that Trump would take credit for positive economic numbers such as the recent report that the Gross Domestic Product grew at the annualized rate of 3.0%, the performance of the stock market since Election Day last November, or the recent jobs reports that show that just over a million jobs have been created since he became President. This is something that every Presidential Administration has been inclined to do in the past after all even though the reality is that the state of the economy has very little to do with who the President happens to be, or often even what policies they have enacted. In Trump’s case, though, the claim is particularly galling for several reasons. For one, there were several points during the course of the campaign, as well as before he even entered the race, when Trump essentially claimed that the statistics being released by government agencies were faked to make President Obama look good, a claim that was repeated without question by many conservatives who were supporting Trump even back then thanks to his anti-Obama message. Additionally, Trump frequently promised during the campaign that he would deliver a better economy than President Obama has, but he clearly has failed to do so. There is no sign, for example, of the four to five percent growth in Gross Domestic Product that he promised and, as I noted in my post about the August jobs report last Friday, his promise of 25,000,000 new jobs would require jobs growth far, far higher than we’re currently averaging and far higher than we’ve seen at any point since the mid-1990s when the economy was booming thanks mostly to the so-called “Dot Com” boom. Finally, even if it were true that the economy is doing better than it did under President Obama, Trump can’t claim that anything he has done has anything to do with it. With the exception of signing into law a handful of bills that repeal a few minor regulations enacted during the Obama Administration, neither Trump nor the Republicans in Congress have enacted any legislation that can be said to have a major impact on the economy. That may change in the coming weeks as Congress deals with the debt ceiling, the budget, and, potentially, some form of tax reform, but so far Republicans in Washington have no real basis for saying that they’ve done anything that can be said to have any impact on the economy.

The truth is that, if anything, the economy is actually doing slightly worse under the Trump Administration than it did under the economy, as this chart regarding jobs creation shows: 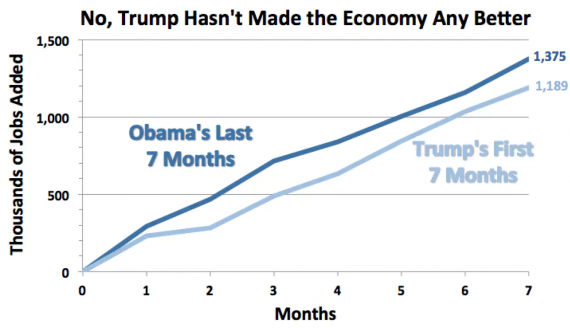 You won’t hear President Trump or his flunkies talking about the truth on this matter, of course, but the reality is that, at best, the economy is doing about the same under him as it did for eight years under President Obama. Given that we’re already eight years into the current economic recovery, that status quo is likely to continue, and the odds that we’ll see the kind of explosive growth that he’s promised are quite simply unrealistic. If anything, history shows us that we’re more likely to see slower growth going forward given the fact that the economy is clearly at or near full employment and there appears to be little room for the expansion at this late stage of the recovery. In fact, it’s more likely that we’ll see a slight recession in the years between now and 2020 than that we will see an economic boom. If and when that happens, President Trump could find that his already pathetically bad job approval numbers, which are only slightly better when it comes to the economy, will get even worse than they already are.