So Much For “Repeal And Replace”

Whatever happened to the GOP's promise to "repeal and replace" the Affordable Care Act? 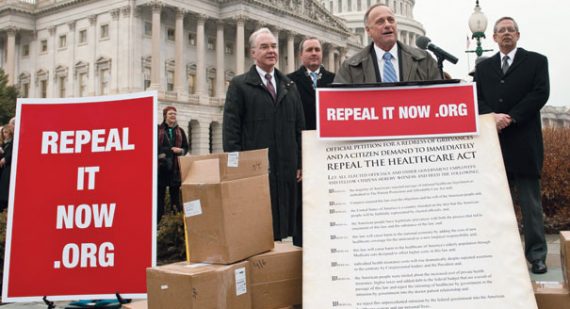 Politico notes that the Republican health care agenda of “repeal and replace” is pretty much dead:

House Republicans haven’t held a floor vote on a bill or amendment trying to repeal, defund or even nick the law for six weeks, after a dozen attempts earlier this year. The stream of committee hearings to pick apart the law’s policies — held back-to-back-to-back earlier this year — has slowed to a trickle.

And not a single element of their “replace” agenda has gotten a House floor vote.

Senate Republicans — who made similar pledges to fight the Democratic majority to try to defeat the law — haven’t had much luck either. Republicans haven’t been able to force a vote on any proposal against the health plan since failed attempts to defund the law and Planned Parenthood in mid-April.

For all of their promises to do everything they can to stop the law, the only thing Republicans have been able to get to President Barack Obama’s desk is the bill to eliminate the requirement that businesses file 1099 tax reporting requirements.

None of this is entirely surprising. As I noted at the beginning of the year, there was simply no way that repeal of the Affordable Care Act was going to get any further than a party line vote in the House. The one provision that has been repealed, the 1099 reporting requirement, was widely derided on both sides of the aisle and its repeal had bipartisan support. The rest of the GOP health care agenda, though, ran up against cold hard reality:

Privately, Republicans cite a combination of factors as to why the health activity has slowed down. Other issues have come up, including the debt limit and military activity in Libya. Some question whether holding a vote now on the law’s most unpopular provision — the individual mandate— would undermine the various lawsuits against it, or would be more politically useful closer to the November 2012 election.

But there are also signs that House GOP leadership has grown weary of fighting an uphill battle on the issue. One possible reason for the fatigue factor: All but one of the repeal laws they’ve passed this year have died in the Senate.

Rep. Steve King (R-Iowa), one of the House’s most ardent supporters of repealing or defunding the law at all costs, says it has become more difficult to get the attention of House leaders.

“I can’t get any traction,” he said of his effort to repeal or defund the law. “You can’t create something in this Congress unless leadership approves it.”

He questioned whether Republican leaders are willing to repeal the whole law if it means also repealing some of its popular provisions.

“There’s a little bit of an undercurrent that I pick up among well-positioned people in this Congress who think there could be some redeeming qualities of Obamacare,” pointing to statements Republican leadership have made in support of a handful of the law’s policies, such as banning insurers from denying patients because of preexisting conditions or allowing children to remain on their parents’ insurance through age 26.

In other words, it might not be smart politics for Republicans to head into the 2012 Congressional elections with a vote on their record that is purely symbolic and could be spun against them. Additionally, while the health care reform plan remains highly unpopular in the polls, the public is more sharply divided on the question of repeal. But all of that is largely irrelevant next to the simple fact that there are really only two ways that the Affordable Care Act is repealed. Either the Supreme Court ultimately strikes the law down as unconstitutional, or the GOP wins both the White House and a sufficient majority in the Senate in 2012 to permit it to push through a repeal bill in 2013. Both of those strike me as long shots.

Honestly, I always thought that the entire “repeal and replace” mantra was nothing more than a sop from the GOP to the Tea Party crowd, dressed up in a way to make it acceptable to the public. Rather than just saying they were going to repeal a law that contains some provisions that are politically popular — such as the ban on denial of insurance to people with pre-existing conditions — the GOP could tell the public that what they really were going to do was replace ObamaCare with something better. The fact that there was never any chance that such legislation could make it through Congress unless the GOP controlled both branches, and that it would never survive a Presidential veto, was glossed over. All that mattered was that they said they would repeal Obamacare.

The most important factor in all of this, though, is the fact that the GOP victories in November 2010 had nothing to do with repealing the health care law, and everything to do with the economy:

Compounding the political impact of the long downturn, 87 percent remain worried about the economy’s direction in the next year — including half “very” worried. They voted more than 2-1 for Republicans this year, 70-28 percent.

The economy has deeply affected the broader public mood. Sixty-one percent in the national exit poll said the country’s headed seriously off on the wrong track; they supported Republicans by 75-23 percent. More broadly, 38 percent said they expect life for the next generation of Americans to be worse than it is today, vs. 32 percent better — a negative balance on one aspect of the American dream.

Exit polls have had varying “most important issues” lists since 1992 with “the economy” as an issue. This year, 62 percent of voters picked it as the single most important issue in their vote — and they voted 53-44 percent for Republicans for House. It was the first time economy voters favored Republicans.

Only 19% of voters in November 2010 said that health care was an influence on their vote. So, the idea that the GOP won any kind of a mandate on this issue is simply false. The less time they spend on it, the less time they appear to be ignoring the issues that matter to the voters who sent them to Washington.

The GOP can choose to make repeal of the PPACA, and the Ryan Plan’s Medicare changes, an issue in 2012, and perhaps they should. However given recent polling I’m not sure they’d get an enthusiastic reception from the public.