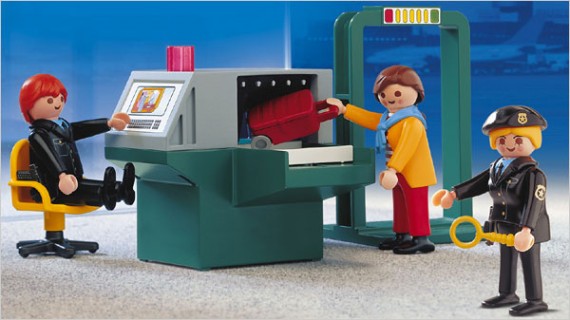 On Wednesday’s OTB Radio, I mentioned a toy that the good people at Playmobil have been selling for about a year now that seems to be, well, just a little creepy in light of current events:

Playmobil toys depict real-life settings, and not always cheery ones, like a police station, hospital and animal clinic. But one, the Security Check Point, took that philosophy too far for some parents.

The set — which includes armed airport security officers, a metal detector and an X-ray screening machine — has drawn nearly 50 biting customer reviews, and scores of comments to those reviews, on Amazon.com.

“I applaud Playmobil for attempting to provide us with the tools we need to teach our children to unquestioningly obey the commands of the State Security Apparatus,” wrote one Amazon reviewer pseudonymously. “But unfortunately, this product falls short of doing that. There’s no brown figure for little Josh to profile, taser, and detain?”

The popular blogs BoingBoing and Jezebel are among hundreds to recently feature the product, which was made from 2003 until 2007 and is still available from many retailers.

Michelle Winfrey, marketing manager for Playmobil U.S.A., said the company, which is based in Germany, has never drawn so much ridicule.

“For whatever reason — maybe it was just the timing — that truly is the one item that people harped on,” said Ms. Winfrey, adding that the company’s decision to stop producing it was not because of criticism but rather consistent with its habit of doing limited runs for toys.

“The whole premise behind Playmobil toys is to familiarize the child with the realities of life through play,” Ms. Winfrey said. “If you’re taking a child for a first flight to Florida from New Jersey to visit grandparents, you say, ‘This is what the terminal looks like, and when we get here we have to take our shoes off and walk though security.”

One tongue-in-cheek review on Amazon (where the item is currently not available for sale) summed it up quite nicely:

“As an adjunct to this product,” Christopher Barber wrote in Amazon’s customer review section, “I would also recommend that you purchase the Playmobil Armed Standoff Playset, Fisher-Price Little People Battering Ram, and the Nerf Tear-Gas Canister Deployment Gun.”

Or, maybe you’d be interested in the Playmobil Police Checkpoint (3906)

, or maybe the Playmobil Roman Arena

where you can send dissenters and infidels to the lions.