So Much for Her Privacy and Life as a Secret Agent

I guess the idea of her returning to work as a secret agent is pretty much history now, 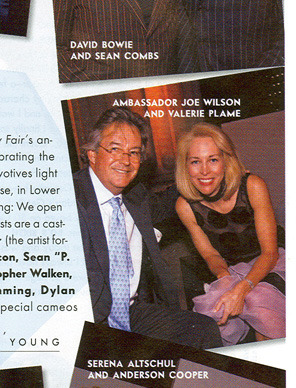 According to Vanity Fair, the photo was taken at the magazine’s annual dinner for the Tribeca Film Festival, and Plame’s and Wilson’s fellow guests included Robert deNiro, Nicole Kidman, Barry Diller, Willem Dafoe, John McEnroe, and many others. Plame’s and Wilson’s photo appears below a shot of David Bowie and Sean “P. Diddy” Combs. The Times also cites friends who say the privacy-protecting Plame and ambassador Wilson “have had a low-key social life.”

Right, a low-key social life…at a party with David Bowie and Sean Combs. Sure.