Reversing a previous decision, Sony will allow The Interview to be screened in a small number of theaters. 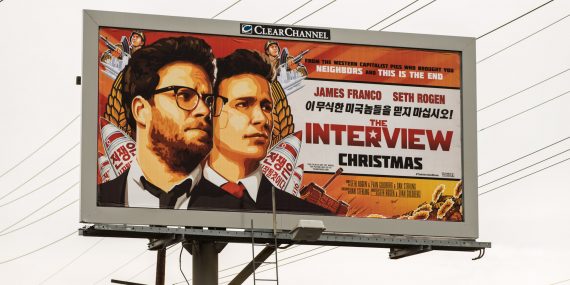 Reversing a decision it had made at the end of last week after every major film distributor and theater chain had backed out of showing the film, Sony Pictures has decided to make The , Interview, the Seth Rogan/James Franco comedy that depicts the assassination of Kim Jong Un and which came to be at the center of a hacking attack and threats of violence from sources the F.B.I. has traced to North Korea, available for screening after all:

LOS ANGELES — Sony Pictures said on Tuesday that it had secured a limited theatrical release for “The Interview” on Christmas Day.

“We have never given up,” Michael Lynton, chief executive of Sony Entertainment, said in a statement. He added that in addition to the limited theatrical release, “We are continuing our efforts to secure more platforms and more theaters so that this movie reaches the largest possible audience.”

Last week, about 80 percent of the theaters in the United States and Canada refused to show “The Interview” in the face of a terror threat. But over the last day Sony reached out to theater owners again, asking if they would rebook the film.

One person briefed on the effort said on Tuesday that it appeared unlikely that big chains like Regal or AMC would come on board but that Sony was likely to patch together distribution for the film in 200 to 300 smaller theaters. Already some theaters, like the Alamo Drafthouse chain, based in Austin, and the Plaza Theater in Atlanta have said they would show the film.

“Sony has authorized screenings of ‘The Interview’ on Christmas Day,” Tim League, the chief executive of the 30-theater Alamo chain, wrote on Twitter on Tuesday morning. Mr. League did not immediately respond to a query.

Representatives of the four largest theater chains in the United States either declined to comment or had no immediate comment. The people who were briefed on Sony’s effort insisted on anonymity because the negotiations over the film’s release were continuing.

Even a 300-theater run would be largely symbolic in financial terms. Sony had planned to release “The Interview” on 2,000 to 3,000 screens in North America.

A new facet of Sony’s discussions with theater owners is any simultaneous video-on-demand effort. Theaters, worried about the possible impact on ticket sales, remain adamant about refusing to open their doors to any film that is showing or about to show elsewhere, according people briefed on the discussions. Studios typically give theaters a monthslong exclusive window to play new movies.

It remained unclear, however, whether any on-demand service would take “The Interview.” According to people briefed on the matter, Sony had in recent days asked the White House for help in lining up a particular technology partner but no deal had materialized. Sony had particularly hoped for a partnership with Apple.

A release plan would end a mad scramble on the part of Sony to find a way to get “The Interview” seen and begin a new period of disquiet for the studio and its partners. The hacker group that digitally ransacked Sony beginning late last month, and that threatened theaters with violence if they played it, also warned that the assault would continue if alternate distribution plans were made.

The Interview” had been scheduled for release on Christmas Day. But when hackers on Dec. 16 warned of 9/11-scale violence if the film were shown, multiplex owners canceled their bookings in the face of pressure from their lawyers, shopping mall landlords and even Sony competitors, which were worried about their own films.

Theater owners and government officials have been trying to assess the threat’s credibility. One person briefed on the exhibitors’ deliberations said law enforcement officials had become less inclined over the last few days to see the threat as serious.

Sony at first said it was shelving “The Interview” completely but quickly decided to look for a mainstream cable, satellite or online movie distributor to adopt the film. Worried about the repercussions of allowing a foreign power to censor American artistic expression, a wide range of people — President Obama, Salman Rushdie, numerous Hollywood stars — publicly pressured Sony to find an alternative.

At least to some extent, this decision brings to an end what had turned into something of a public relations disaster for Sony that started when the President criticized the company for deciding to pull the movie, a criticism he did not back down from even when Sony pointed out that it had little choice in the matter when virtually its entire distribution chain had pulled out of deals to screen the movie starting on Christmas Day. Balancing out the public relations side of the equation, of course, is the issue of the threat that there will be renewed hacking attacks, not just against Sony but also against the companies affiliated with the theaters that will show the movie. There are also the threats of actual violence directed at the theaters showing the movie, but it is never been entirely clear just how credible those threats actually are, and in any case one imagines that there will be stepped up security at the theaters where the movie will be screened as well as the corporate offices of the theater owner(s), just in case. Overriding both of these concerns, of course, is the issue of the monetary hit that Sony would take from pulling the movie on a permanent basis. According to some reports, The Interview cost from $40 million and that Sony’s total losses from shelving the movie permanently would be somewhere in the neighborhood of $75 million if not higher. Given that, it’s not entirely surprising that the company would look for a way to get the movie out there in an effort to recoup at least some of its losses. The question now will be whether North Korea, or whomever has been running the hacking attacks on its behalf, will respond further.

While I can’t say I have any overriding desire to see this movie, or indeed anything else in the genre of comedies that it belongs to, it is good to see that it’s at least being released. President Obama was correct to when the criticized Sony, and by extension the theater owners and distributors, for caving in to threats so quickly. The only thing that doing so accomplishes is to send a message that such activity can be used to accomplish similar goals in the future. At some point, we have to agree as a society that responding that way to threats, whether its from anonymous hackers or agents of a foreign government, simply is’t acceptable. The consequences otherwise are to open other American businesses, if not the government itself at some point, up to a 21st century version of extortion that would be very hard to combat or prevent. So, in that sense I guess, good for Sony for letting the movie go forward.