The iconic football program built by the legendary Eddie Robinson, is now a sad disgrace. 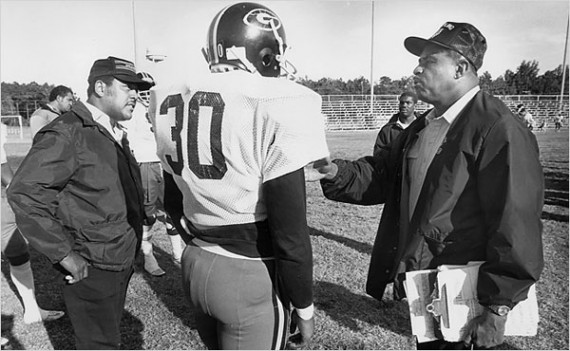 Grambling State, for decades an iconic football program under the legendary Eddie Robinson, is now a sad disgrace. And I’m not just talking about losing ball games.

When I first got wind late yesterday that Grambling’s players had revolted against their interim coach and refused to play today’s game at Jackson State, I was outraged that the players would do that to their school. The more I read, though, it’s clear the outrage, while warranted, was misplaced.

Grambling State football players complained of mold and mildew on equipment and in facilities, having to pay for Gatorade out of their own pockets and even said which assistants they thought would make a good interim coach after the firing of Doug Williams in a letter to the administration obtained by ESPN’s Pedro Gomez.

On Friday Grambling State canceled its football game against Jackson State after Grambling’s disgruntled players refused to travel to Jackson for the game Saturday.

The letter says that “there are certain factors that are hindering us from reaching our goals” and then elaborates on many of them.

The athletic complex “is in horrible condition, and has many hazards that may contribute to our overall health,” the letter says. “First, the complex is filled with mildew and mold. Mildew and mold can be seen on the ceiling, walls and floor, and are contributing to water leaks because of faltering walls and ceilings.”

As has been reported before, the players say that the floor is coming up in the weight room, but the letter also asks that the university supply better detergent for uniforms.

“The uniforms are poorly cleaned and contribute to the multiple cases if staph infection,” the letter reads. “Several players have been infected with staph multiple times.”

A group of 26 photos obtained by Gomez from an unnamed Grambling State player appear to illustrate some of the players’ complaints.

Several of the photographs show walls and ceiling tiles and even player equipment that appear to be covered in mold or mildew. Other photos show floors from the facility’s weight-training room missing wide sections of its rubberized floor tiles, and torn and tattered covers to some of the room’s weightlifting benches.

According to the letter, players have been complaining for some time that Gatorade and the supplement Muscle Milk were not supplied during summer camp or workouts.

“We had to pay for those expensive items ourselves,” the letter states. “We were also forced to get water from hoses underneath the stadium in 90 degree plus weather.”

As has also been reported, players took exception to the fact that they had to travel by bus to Kansas City and Indianapolis.

“One trip was 14 hours while the other was 17,” the letter says. “Players were drained and exhausted after those long rides.”

The players were bothered, according to the letter, that “the president and athletic director traveled by plane.”

In addition, the letter states that money from “friends of football and the alumni association … is being rejected” because the organizations donating the money want it to go to specific areas, while the university demands that it be applied to the university or athletics as a whole.

I have too little information about the coaching performances of Doug Williams and his interim replacement, George Rasdale, to know whether their firings were deserved. My general sense, though, is that the school president and athletic director have the right to make those decisions and that student athletes should get on board.

But the other complaints need no caveat: the school was doing a gross disservice to the young men in their charge. You simply can’t subject them to mold and unsanitary conditions. And, while the insane money going into programs such as that at my graduate alma mater, Alabama, have created an arms race in facilities in which the Gramblings of the world can’t compete, basics like providing potable water, sports drinks, and plane flights for long trips have been the standard even at small schools for decades.

Grambling is a public institution of the state of Louisiana, so the responsibility may go higher than the university’s administration. To be sure, Louisiana is a poor state and it’s been hit disproportionately hard by the recent recession. And most states are providing an ever-decreasing share of the funding for their institutions of higher education.  But, if they can’t afford to ensure the basic health and safety of their student athletes, they should cancel the programs.