The initial instant reaction to the President's speech last night was largely positive, but does it really matter? 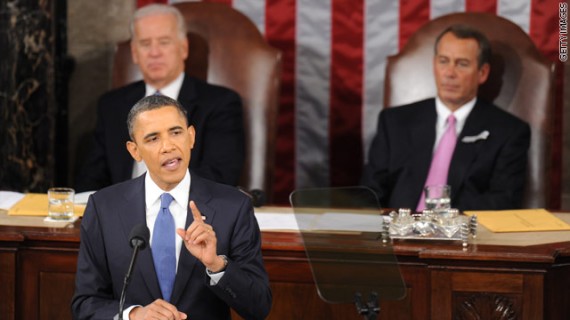 The initial reaction to President Obama’s State Of The Union address from the news network instant polling probably made the White House pretty happy last night:

An overwhelming majority of Americans approved of the overall message in President Obama’s State of the Union speech on Tuesday night, according to a CBS News poll of speech watchers.

According to the poll, which was conducted online by Knowledge Networks immediately after the president’s address, 91 percent of those who watched the speech approved of the proposals Mr. Obama put forth during his remarks. Only nine percent disapproved.

This year, 82 percent of those who watched the speech said they approve of the president’s plans for the economy, up from 53 percent who approved before the speech. Eighty percent said they approved of Mr. Obama’s plans for the deficit — in contrast to 45 percent before the speech. Eighty-three percent approved of Mr. Obama’s proposals regarding Afghanistan, which received only a 57 percent approval rating beforehand.

It’s important to note, of course, that these instant polls are limited to people who actually watched the address and, historically, it’s more likely for someone who supports the President to watch the speech than someone who doesn’t. Therefore, they aren’t at all indicative of how the speech will be received by the public at large or how it might impact the President’s job approval numbers.

CNN’s poll, on the other hand, drew from a wider sample, but still had largely positive results for the President:

A majority of Americans who watched President Obama’s State of the Union address said they had a very positive reaction to his speech, according to a poll of people who viewed Tuesday night’s address.

A CNN/Opinion Research Corporation survey indicated that 52 percent of speech watchers had a very positive reaction, with 32 percent saying they had a somewhat positive response and 15 percent with a negative response.

The 52 percent who indicated they had a very positive response is up four points from the 48 percent of speech watchers who felt the same way a year ago about the president’s January 27, 2010 State of the Union address.

Still, even the CNN poll demonstrates that the viewing audience was heavily tilted toward those inclined to support the President:

There were also several “focus group” studies using select audiences and judgment their attitudes toward the President both before and after the speech. One, from Democrat Stan Greenberg, was largely positive:

President Obama’s second State of the Union was a “personal triumph” that received strong, positive reactions from Democrats and Republicans, according to an instant analysis from the polling firm Greenberg Quinlan Rosner.

The firm monitored the reactions of swing voters and unmarried women from Colorado as they watched the speech. According to the analysis, before the address, the test group’s approval of the president was 30 percent – by the end of the speech, the approval rating had gone up to 56 percent.

One of the most unique aspects of the reactions to the speech was that the three lines of Democrats, Republicans and independents that tracked the respondents’ feelings moved mostly together throughout the whole speech, an unusual occurrence for State of the Union addresses.

Frank Luntz’s Fox News focus group, though, was not quite so impressed:

So, what does all this mean and, more importantly, does it really matter? I’m not quite sure it means much of anything. As I noted yesterday, history indicates that State Of The Union addresses don’t have that much of an impact on Presidential job approval. If Barack Obama’s comeback continues, it will be because the economy is starting to improve and people are feeling more confident about the future. By and large, that’s something that is totally out of the control of either Barack Obama or any of the 535 Members of Congress he was speaking to last night.Yes, they can enact policy that has an economic impact but, at this point, whether things turn around depends on whether the jobs start returning, and that’s not up to them at all.