In my adult memory, the American South was a one-party Democratic region for all but presidential elections. Aside from minority set-aside districts, the reversal is near complete. 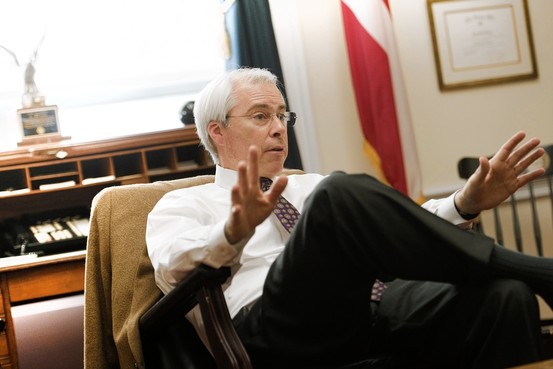 In my adult memory, the American South was a one-party Democratic region for all but presidential elections. Aside from minority set-aside districts, the reversal is near complete.

The only remaining white Democrat in the House of Representatives from the Deep South, Rep. John Barrow, is in jeopardy of losing his job in November, which would mark a monumental shift in American politics.

In an stark realignment, voters in the Deep South have divided into an increasingly black Democratic Party and a mostly white Republican Party. Already, Mississippi, Alabama and Louisiana are represented in the House solely by white Republicans and black Democrats. Georgia could join that list if Mr. Barrow, who is running in a district redrawn to include more whites and Republicans, loses in November.

Mr. Barrow’s challenge is one measure of a political and cultural divide, echoed less dramatically elsewhere in the country, that is changing the face of the two parties. Minorities and women have become a bigger part of the Democratic contingent in the House, while Republicans increasingly are attracting white Southerners.

Leaders of the two parties interpret the phenomenon differently. Republicans say white voters are increasingly voting Republican, turned off by what they say is the Democratic Party’s growing liberalism. Democrats blame Republican leaders for redistricting actions that Democrats say are concentrating black voters in a smaller number of districts.

These explanations are not mutually exclusive.

It should be noted that, over the period that Republicans gained a strangehold over the Deep South in statehouse and congressional races, they’ve lost their Electoral College stranglehold over California, Florida, Virginia, and North Carolina and become much less competitive in places like Pennsylvania.