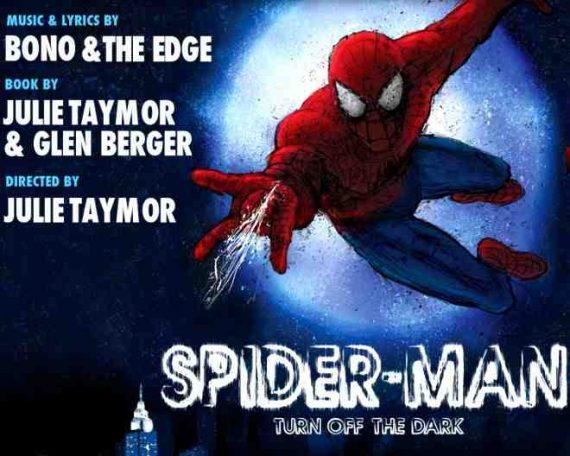 The technical travails of the multimillion dollars, star-studded, effort to bring  Spider-Man to Broadway are fairly well known at this point. Previews have been littered with technical flubs and, in one case, a cast members was seriously injured when a special effect went off badly. Technically, the show is still in previews since it’s Opening has been pushed back several times in response to the problems, but publications have grown weary of the delays and decided to send their reviewers to see the play and review it anyway.

The results were nothing short of a disaster.

Finally, near the end of the first act of “Spider-Man: Turn Off the Dark,” the audience at the Foxwoods Theater on Saturday night got what it had truly been waiting for, whether it knew it or not.

Calamity struck, and it was a real-life (albeit small) calamity — not some tedious, confusing tripe involving a pretty girl dangling from a skyscraper and supervillains laying siege to Manhattan. And not the more general and seriously depressing disaster that was the sum of the mismatched parts that had been assembled onstage.

No, an honest-to-gosh, show-stopping glitch occurred, just as the title character of this new musical was about to vanquish or be vanquished by the evil Green Goblin. Never fully explained “mechanical difficulties” were announced by an amplified voice (not immediately distinguishable from the other amplified voices we had been hearing for what felt like forever), as the actors in the scene deflated before our eyes. And for the first time that night something like genuine pleasure spread through the house.

That glee soon took the form of spontaneous, nigh-ecstatic applause, a sound unheard in the previous hour. After vamping on a green fake piano (don’t ask), Patrick Page (who plays the Goblin with a gusto unshared by any other member of the cast) ad-libbed a warning to Reeve Carney (who stars as Spider-Man), who had been awkwardly marking time by pretending to drink Champagne.

“You gotta be careful,” Mr. Page said. “You’re gonna fly over the heads of the audience, you know. I hear they dropped a few of them.”

“Roar,” went the audience, like a herd of starved, listless lions, roused into animation by the arrival of feeding time. Everyone, it seemed, understood Mr. Page’s reference to the injuries that have been incurred by cast and crew members during the long (and officially still far from over) preview period for this $65 million musical. Permission to laugh had been granted, and a bond had temporarily been forged between a previously baffled audience and the beleaguered souls onstage.

All subsequent performances of “Spider-Man” should include at least one such moment. Actively letting theatergoers in on the national joke that this problem-plagued show has become helps make them believe that they have a reason to be there.

This production should play up regularly and resonantly the promise that things could go wrong. Because only when things go wrong in this production does it feel remotely right — if, by right, one means entertaining. So keep the fear factor an active part of the show, guys, and stock the Foxwoods gift shops with souvenir crash helmets and T-shirts that say “I saw ‘Spider-Man’ and lived.” Otherwise, a more appropriate slogan would be “I saw ‘Spider-Man’ and slept.”

I’m not kidding. The sheer ineptitude of this show, inspired by the Spider-Man comic books, loses its shock value early. After 15 or 20 minutes, the central question you keep asking yourself is likely to change from “How can $65 million look so cheap?” to “How long before I’m out of here?”

The Washington Post’s Peter Marks was just as severe:

NEW YORK – If you’re going to spend $65 million and not end up with the best musical of all time, I suppose there’s a perverse distinction in being one of the worst.

Mind you, I haven’t seen every stinker ever produced, so I can’t categorically confirm that “Spider-Man: Turn Off the Dark” belongs in the dankest subbasement of the American musical theater. But its application certainly seems to be in order.

At the outset of the preview I attended, a man appeared onstage to read a short speech about the production’s technical issues and to assure us that “the [New York State] Department of Labor has approved all of our aerial sequences.” It should be noted that no significant glitches occurred over the ensuing two hours and 50 minutes.

Clearly, though, the Department of Lucidity has not been in the building in quite a while. Story-wise, “Spider-Man” is a shrill, insipid mess, a musical aimed squarely at a Cub Scout demographic. Looking at the sad results, you’re compelled to wonder: Where did all those tens of millions go?

The 8-year-old boys in the audience might be able to key on the Cirque du Soleil-style stunts on wires and video-game graphic elements, and probably not worry too much that “Spider-Man” is a tangle of disjointed concepts, scenes and musical sequences that suggests its more appropriate home would be off a highway in Orlando. Come to think of it, the optimal audience might be non-English-speaking.

The tale doesn’t so much unfold as ooze out, on the operating theory that if you throw everything against a theater wall, something might stick. It essentially begins with the superhero metamorphosis of nerdy Peter Parker, played by the likable Matthew James Thomas at the performance I attended; he alternates in the role with Reeve Carney. From there, things get convoluted, fast.

Solemn comic-book myths merge with solemn Greek myths and apocalyptic environmental visions for the origin stories of heroes and villains, who multiply in numbers (and ever more outrageous get-ups) as the production wears on. Shapeless expository scenes in laboratories and newsrooms elongate the proceedings. A perfunctory romance lurches along between Peter and the love of his life, budding actress Mary Jane Watson (Jennifer Damiano).

Ouch. That’s gonna leave a mark, and Marks and Brantley aren’t the only ones to pan the show. So far, every critic who has seen the show has proclaimed it a disaster. Producers are crying foul over the early reviews, of course, but considering most of the complaints were related to the plot, rather than the technical aspects of the show, one wonders what another month of “previews” would have improved upon  I’ve only had a passing interest in this saga because of the celebrities involved in the production, and the subject matter, which has been part of comic books and movies for decades. Based on these reviews, it would seem that not every story translates well into every medium. 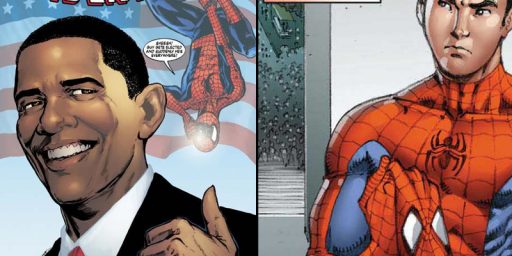