The post-Sputnik innovation wave was sparked by government investment, not the entrepreneurial spirit. 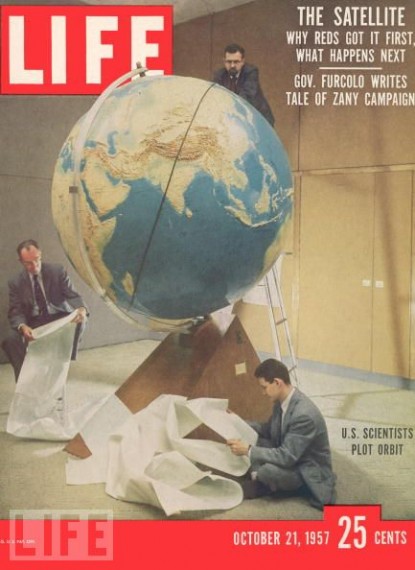 Kevin Drum smacks down President Obama’s account of how we won the space race:

It’s true that after the launch of Sputnik science and math education became an American obsession, but that’s not what got us to the moon. The scientists and engineers who eventually built the Apollo rockets weren’t teenagers, after all. They were grown men and women who’d been educated in the 40s and 50s. The post-Sputnik push for better technical education may or may not have paid off—remember the New Math?—but if it did, it paid off two decades later in the personal computer revolution of the 80s.

So how did we unleash a “wave of innovation that created new industries and millions of new jobs”? Obama only touched on that in his speech, but part the answer is: big government.

The microchip would have found a market eventually even without NASA, but it might have taken years longer. And this same story goes beyond just integrated circuits. The first computer, ENIAC, was originally designed for the United States Army’s Ballistic Research Laboratory. The internet was originally funded by the Pentagon’s Advanced Research Projects Agency—which had been created in the wake of Sputnik—and was based on packet switching technology invented by a professor at a public university. And today, rocket technology itself, originally designed and funded by the federal government, is starting to become a thriving private business as well.

It was the private sector that turned these inventions into multi-billion dollar businesses, but it was government that provided either the basic research, the initial market, or both.

This is exactly right.   I’m less enamored of big government programs than Kevin but there’s no denying that government is uniquely positioned to concentrate enormous resources on a problem and sometimes does so to spectacular success.

The Manhattan Project and the space program are classic examples.  Given a specific, tangible goal, the government was able to assemble the most brilliant scientists and give them every tool possible to get the job done.  And, of course, both of these projects led, sometimes accidentally, to amazing advances in spin-off technology that improved our lives and drove massive improvements in the civilian economy.

Kevin mentions the Internet, which was initially a Defense project.   Nobody at D/ARPA every envisioned where it would all lead, because their goals were discrete.  But it’s unlikely that the backbone would have been built by the private sector; the investment would have been too much and the profits too diffuse to make it worthwhile.  (Or, alternatively, it would have been a patented, closed system and not developed into anything like what we now have.)

Most of our pharmaceutical research and pure science is at least partly funded by government grants, if not done in government labs.

Let’s stipulate that there have been spectacular failures, most notably including virtually domestic problem against which we’ve declared “war.”  Government is less able to achieve broad, amorphous goals than finite ones like “put a man on the moon by the end of the decade.”  Then again, the private sector often has no interest at even attempting to pursue major social goals, especially if the target audience isn’t particularly affluent.

Further, the private sector is much better at coming up with the thousands of innovations that improve our lives every day than government.  Because of its massive scale, government tends to be much slower moving and able to fund fewer, larger programs.  Many if not most of the technologies that effect us on a day-to-day basis were initially built by the equivalent of an inventor tinkering around in his garage or a college kid tinkering around with some code.  The “winners” then frequently get bought out by bigger companies or get massive government contracts, but the innovation itself was bottom-up.