The star of a controversial reality show about polygamy is suing to have Utah's law that makes his living arrangement illegal struck down. 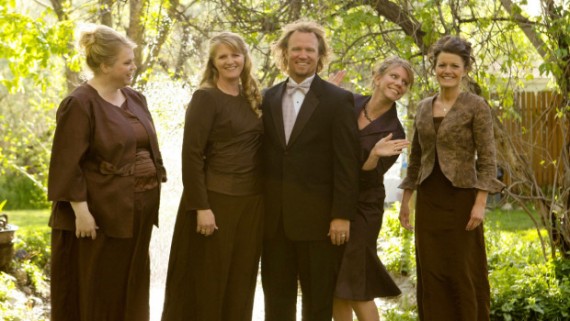 The star of a cable reality show about the lives of a polygamous Utah family wants to take the State of Utah to Court:

Kody Brown is a proud polygamist, and a relatively famous one. Now Mr. Brown, his four wives and 16 children and stepchildren are going to court to keep from being punished for it.

The family is the focus of a reality TV show, “Sister Wives,” that first appeared in 2010. Law enforcement officials in the Browns’ home state, Utah, announced soon after the show began that the family was under investigation for violating the state law prohibiting polygamy.

On Wednesday, the Browns are expected to file a lawsuit to challenge the polygamy law.

The lawsuit is not demanding that states recognize polygamous marriage. Instead, the lawsuit builds on a 2003 United States Supreme Court decision, Lawrence v. Texas, which struck down state sodomy laws as unconstitutional intrusions on the “intimate conduct” of consenting adults. It will ask the federal courts to tell states that they cannot punish polygamists for their own “intimate conduct” so long as they are not breaking other laws, like those regarding child abuse, incest or seeking multiple marriage licenses.

Mr. Brown has a civil marriage with only one of his wives; the rest are “sister wives,” not formally wedded. The Browns are members of the Apostolic United Brethren Church, a fundamentalist offshoot of the Mormon Church, which gave up polygamy around 1890 as Utah was seeking statehood.

It’s worth noting that Utah’s bigamy statute not only outlaws multiple marriages, it also outlaws cohabitation with one or more persons while legally married to another. From a legal point of view, Brown is only married to one woman, but under Utah’s law he is violating the law because of the cohabitation arrangement, which from all appearances is entirely consensual on the part of all parties. Essentially what the lawsuit would seem to be arguing is that, based on the Supreme Court’s ruling in Lawrence v. Texas, Utah cannot make it illegal for a married couple to engage in a consensual living arrangement of their choice with other adults, as long as they aren’t breaking any other laws.

George Washington Law School Professor Jonathan Turley will be representing the Browns and issued this statement:

“We believe that this case represents the strongest factual and legal basis for a challenge to the criminalization of polygamy ever filed in the federal courts. We are not demanding the recognition of polygamous marriage. We are only challenging the right of the state to prosecute people for their private relations and demanding equal treatment with other citizens in living their lives according to their own beliefs. This action seeks to protect one of the defining principles of this country, what Justice Louis Brandeis called ‘the right to be left alone.’ In that sense, it is a challenge designed to benefit not just polygamists but all citizens who wish to live their lives according to their own values – even if those values run counter to those of the majority in the state.

The U.S. Supreme Court has ruled once before on the Constitutionality of laws against polygamy. In Reynolds v. United States, the Court denied the argument of a man living in what was then Utah Territory that the laws against polygamy violated his First Amendment rights. This case was heard, of course, during the period in which Utah’s statehood was a hotly debated topic, largely because of the Mormon practice of polygamy. It wasn’t until the LDS Church repudiated polygamy in 1890 that the dispute was completely resolved. This case takes a very different tack from Reynolds and, of course, these are very different times.

Perhaps the best argument in the Browns favor is the fact that the language in Lawrence v. Texas, which struck down laws against sodomy, was very broad in its definition of the scope of liberty that is entitled to autonomy from government control:

To say that the issue in Bowers was simply the right to engage in certain sexual conduct demeans the claim the individual put forward, just as it would demean a married couple were it to be said marriage is simply about the right to have sexual intercourse. The laws involved in Bowers and here are, to be sure, statutes that purport to do no more than prohibit a particular sexual act. Their penalties and purposes, though, have more far-reaching consequences, touching upon the most private human conduct, sexual behavior, and in the most private of places, the home. The statutes do seek to control a personal relationship that, whether or not entitled to formal recognition in the law, is within the liberty of persons to choose without being punished as criminals.

This, as a general rule, should counsel against attempts by the State, or a court, to define the meaning of the relationship or to set its boundaries absent injury to a person or abuse of an institution the law protects. It suffices for us to acknowledge that adults may choose to enter upon this relationship in the confines of their homes and their own private lives and still retain their dignity as free persons. When sexuality finds overt expression in intimate conduct with another person, the conduct can be but one element in a personal bond that is more enduring. The liberty protected by the Constitution allows homosexual persons the right to make this choice.

The present case does not involve minors. It does not involve persons who might be injured or coerced or who are situated in relationships where consent might not easily be refused. It does not involve public conduct or prostitution. It does not involve whether the government must give formal recognition to any relationship that homosexual persons seek to enter. The case does involve two adults who, with full and mutual consent from each other, engaged in sexual practices common to a homosexual lifestyle. The petitioners are entitled to respect for their private lives. The State cannot demean their existence or control their destiny by making their private sexual conduct a crime. Their right to liberty under the Due Process Clause gives them the full right to engage in their conduct without intervention of the government. “It is a promise of the Constitution that there is a realm of personal liberty which the government may not enter.” Casey, supra, at 847. The Texas statute furthers no legitimate state interest which can justify its intrusion into the personal and private life of the individual.

If Justice Scalia has heard of this case yet, he’s probably saying “I told you so.” Because  in his strongly worded dissent Lawrence he did just that:

State laws against bigamy, same-sex marriage, adult incest, prostitution, masturbation, adultery, fornication, bestiality, and obscenity are likewise sustainable only in light of Bowers‘ validation of laws based on moral choices. Every single one of these laws is called into question by today’s decision; the Court makes no effort to cabin the scope of its decision to exclude them from its holding. See ante, at 11 (noting “an emerging awareness that liberty gives substantial protection to adult persons in deciding how to conduct their private lives in matters pertaining to sex” (emphasis added)). The impossibility of distinguishing homosexuality from other traditional “morals” offenses is precisely why Bowers rejected the rational-basis challenge. “The law,” it said, “is constantly based on notions of morality, and if all laws representing essentially moral choices are to be invalidated under the Due Process Clause, the courts will be very busy indeed.” 478 U.S., at 196

In fact, part of Scalia’s dissent in Lawrence ended up being used by the Judge in the case that overturned California’s Proposition 8:

If moral disapprobation of homosexual conduct is “no legitimate state interest” for purposes of proscribing that conduct…what justification could there possibly be for denying the benefits of marriage to homosexual couples exercising “the liberty protected by the Constitution”? Surely not the encouragement of procreation, since the sterile and the elderly are allowed to marry.

Of course, just because an argument is legally persuasive that doesn’t mean it is going to be successful in Court, especially when you’re dealing with an issue like as controversial as this one happens to be. As Eugene Volokh noted several years ago,a legally plausible, indeed persuasive argument, is  sometimes only half the battle:

I’ve argued in my Same-Sex Marriage and Slippery Slopes that polygamous marriages are indeed unlikely to be recognized in the U.S., even if same-sex marriages are recognized. If the same-sex-marriage-recognition movement wins, and especially if it wins by stressing certain kinds of arguments, those arguments may indeed be logically usable by polygamy-recognition forces. But, as I argued, “It takes more than a plausible argument to win battles like this, either in the legislature or in court. It makes more than a plausible argument plus some slippery slope effects. It takes a broadly supported political and legal movement (whether of a majority or a committed substantial minority) of the sort that gay rights advocates have managed to muster. I doubt that there?ll be such a movement for polygamist rights, even with the potential slippery slope effects I describe.”

While I tend to think that Volokh is right about the odds of success for any argument like this right now, I cannot honestly see why Brown and his legal wife should not be permitted to enter into whatever relationships they want in the privacy of their home.  Whether and when that right will be recognized is something that remains to be  seen.

Here’s the Complaint, which was just filed this afternoon: