Stephen Colbert Treasurer Goes to Rick Perry (with an E) 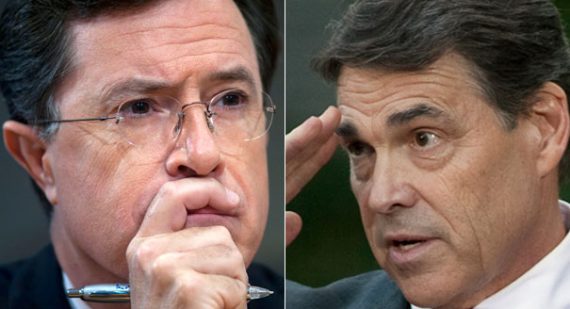 Salvatore Purpura, who has represented numerous political committees as treasurer over the years, told POLITICO that he resigned on Thursday as treasurer of Colbert’s super PAC, Americans for a Better Tomorrow, Tomorrow.

Then, on Monday, Perry – not Parry – formally filed paperwork with the Federal Election Commission listing Purpura has his campaign treasurer.

“Obviously, there was a potential conflict of interest,” Purpura said. “I told [Colbert lawyer] Trevor [Potter] on Thursday I would not be able to be treasurer anymore.”

Colbert, in an email to POLITICO, praised Purpura’s service.

“We’re not surprised. Sal is the best in the business. That’s why we went with him,” Colbert wrote. “We’re happy for Sal and we are even happier that Governor Parry has sent the clear signal of which super PAC he trusts to receive all that unlimited money waiting to pour in on his behalf. Loud and clear, sir. Unofficially, loud and clear.”

It’s actually somewhat interesting that Colbert, who’s obviously sympathetic to the Democratic cause, had Purpura on the payroll given his long tradition of work with Republican candidates:

But it would be, to say the least, awkward for him to simultaneously work for Perry and for a comedic device ostensibly out to wreck Perry’s campaign with ads like this: