Chris Lawrence shares (via Google Reader) Valerie Aurora‘s post titled “You can do something about street harassment.”

The intro is a useful reminder of how routine it is for women to feel victimized, recounting how often strangers make rude catcalls, how they seem to enjoy whatever reactions they get from their victims, and how generally powerless it makes the victims feel.   While I spend a reasonable amount of time walking in downtown DC, this is a problem I’m oblivious to on a personal level.

The “something” that it’s proposed “you” can do, however, worries me:

Hollaback is raising money (via Kickstarter) for an iPhone app that will let you take a photo and post it to an online map and database. You can already post to the Stop Street Harassment Global map. Street harassment depends on anonymity — most of these guys only do it when there are not many people around, or so quietly that no one else can hear. The more men get their photos up on the Internet when they harass women, the less harassment there will be.

Perhaps.   The likelihood of being publicly humiliated and exposed will doubtless make some of these yahoos behave better.  But I’m guessing that a not insignificant number of said yahoos will react violently to being confronted in this manner.   Or, as I put it more glibly when sharing said post:

Down: Incidences of street harassment.

Up: Incidences of violence in response to attempts to photograph street harassers. 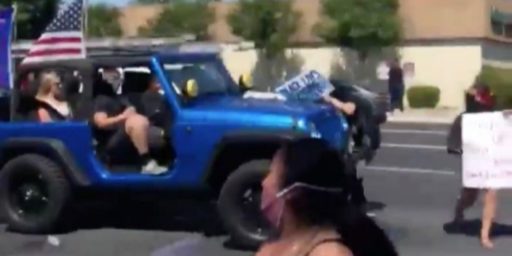