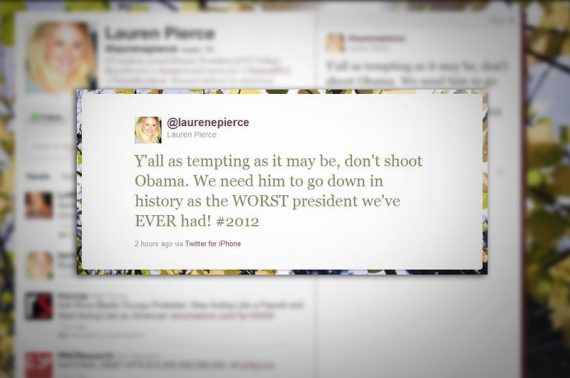 For some reason, the head of the UT College Republicans thought it was a good idea to joke about Presidential assassination on Twitter

Hours after Pennsylvania State Police arrested a 21-year-old Idaho man for allegedly firing a semi-automatic rifle at the White House, the top student official for the College Republicans at the University of Texas tweeted that the idea of assassinating President Obama was “tempting.”

Pierce, the president of the College Republicans at UT Austin, told ABC News the comment was a “joke” and that the “whole [shooting incident] was stupid.” Giggling, she said that an attempted assassination would “only make the situation worse.”

“Insofar as she’s a representative [of the College Republicans], maybe it shouldn’t be said, but she’s made a positive statement in a way, ” said Cassie Wright, the group’s vice president.

“I don’t really see anything wrong with it,” Wright added. “It’s just a personal comment, not representative of any group. Just freedom of speech, you know?”

Photo via The Texas Tribune