Andrew Sullivan is mad at the Administration, and it has nothing to do with gay marriage or the New York Times:

I’m talking about this $170 billion foray into space. After all, the next generation will be paying for a collapsed social security system, a bankrupted Medicare program, soaring interest on the public debt, as well as coughing up far higher taxes to keep some semblance of a government in operation. But, hey, the president needed another major distraction the week before the Iowa caucuses, and since he won’t be around to pick up the bill, why the hell not? Deficits don’t matter, after all. And what’s a few hundred billion dollars over the next few decades anyway? Chickenfeed for the big and bigger government now championed by the Republicans. This space initiative is, for me, the last fiscal straw. There comes a point at which the excuses for fiscal recklessness run out. The president campaigned in favor of the responsibility ethic. He has governed – in terms of guarding the nation’s finances – according to the motto: “If it feels good, do it.” I give up. Can’t they even pretend to give a damn?

I’m not particularly excited about this initiative and have not been persuaded that it’s a worthy priority right now. But the idea that this is some sort of diversionary tactic to take attention away from the Iowa caucus is rather silly. Indeed, one would think it would be in Bush’s best interest to get as much media coverage of his potential challengers denouncing one another as possible.

And big public works projects like this are a legitimate function of the federal government. Glenn Reynolds’ “space cowboys” idea notwithstanding, it’s unlikely that these sort of advances will happen through private action. 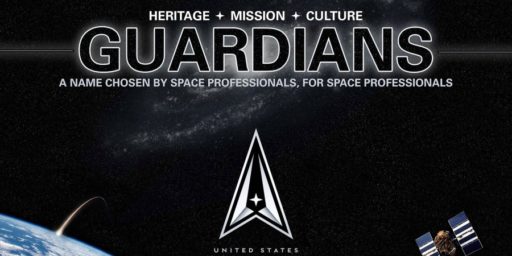