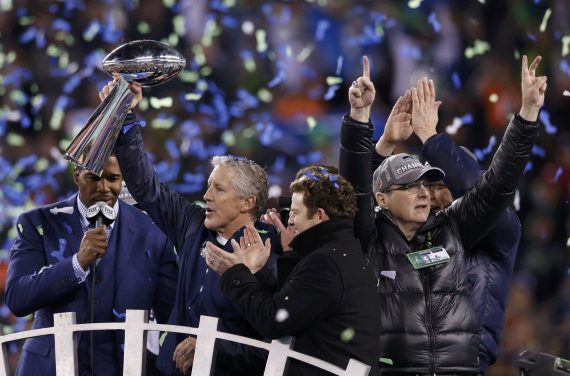 Continuing a streak that began with Super Bowl XLIV in 2010, Sunday night’s broadcast of Super Bowl XLVIII set another viewership record despite the lopsided result:

Final ratings are in for the 2014 Super Bowl — and, contrary to early returns, which saw the game ranking fifth all-time, the NFL season finale ended up being the biggest to date. An average 112.2 million viewers tuned in to see the Seattle Seahawks blow the Denver Broncos out of the water, making it the most watched Super Bowl and the most watched program in U.S. television history.

That’s up nearly 4 million from last year’s Super Bowl, which averaged 108.4 million viewers. That game, between the Baltimore Ravens and the San Francisco 49ers, though close, suffered an audience drop when a power outage halted the game for 30 minutes.

This year’s matchup, which measured up to last year’s game with a 46.7 rating among households and a 69 share, saw its best ratings toward the end of the first half. Between 7:30 p.m. and 8 p.m., the Super Bowl averaged a 46.9 rating and a 71 share among households.

Clearly, the Super Bowl remains the last non-breaking news event that draws large numbers Americans together to watch something at the same time.