Warner is releasing a boxed set of the Christopher Reeve Superman movies in November that will feature a radically different version of “Superman II” and a 2001 “Director’s Cut” of the first film.

On the heels of “Superman Returns” storming the box office, the four original “Superman” movies starring Christopher Reeve are set to get the special DVD treatment.

The highlight of the November 28 DVD rollout: “Superman II: The Richard Donner Cut,” a revised version of the controversial 1980 sequel as it originally was conceived and intended to be filmed by director Richard Donner, who also shot the 1978 original. Donner was fired midway through the shoot and replaced by Richard Lester, who gave the film more of a comic bent. The version of the film being prepared for the DVD features Donner’s original footage, shot but never used, including a never-before-seen beginning, a different ending and 15 minutes of Marlon Brando as Jor-El in key scenes that probe deeper into Superman lore and further the relationship between father and son.

Donner shot most of the “Superman II” footage while he was filming “Superman: The Movie.” But as production on the sequel continued, friction between the director and the film’s producers led to his dismissal. Lester was hired to finish the shoot but wound up making substantial changes.

The four-disc “Superman: The Movie” includes two versions of the movie: The 1978 theatrical original and the 2001 director’s cut.

A very interesting concept. I’d be interested in seeing the Donner version but it’s rather odd to have two totally different versions of the same movie. Indeed, I’m generally skeptical of the “Director’s Cut” and other special versions of the movie that make it to DVD, since part of the idea of owning a movie is recapturing the theatrical experience.

This, of course, also brings to mind the “Free Hat” episode of “South Park” which spoofed changes to classic films made by George Lucas and Steven Spielberg. Here’s a few excerpts on video via YouTube: 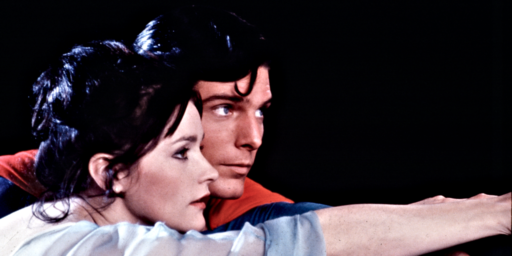