Jason Kottke points me to Stan Carey's summary of Jack Grieve's study of regional variations in swearing patterns across the United States.

Jason Kottke points me to Stan Carey‘s summary of Jack Grieve’s study of regional variations in swearing patterns across the United States. Having spent the last thirteen years in the DC area, which is the swearing capital of the country in addition to being the political capital, I’m somewhat out of touch. As one might expect, swear words follow.

Jack Grieve, lecturer in forensic linguistics at Aston University in Birmingham, UK, has created a detailed set of maps of the US showing strong regional patterns of swearing preferences. The maps are based on an 8.9-billion-word corpus of geo-coded tweets collected by Diansheng Guo in 2013-14 and funded by Digging into Data.

The red-blue scale shows relative frequency. The frequency of a word in the tweets from a given county is divided by the total number of words from that county (which correlates strongly with population density). The result is then smoothed using spatial autocorrection analysis, with Getis-Ord z-scores mapped to identify clusters. Alaska and Hawaii are not included.

Polysemy – a word’s multiple meanings – has not been controlled in the graphs, so the hell map includes straight religious uses as well as sweary ones, the pussy map includes cat references, and so on. But the graphs are nonetheless highly suggestive of differential swearword (and minced oath) clustering in different parts of the country.

Hell, damn and bitch are especially popular in the south and southeast. Douche is relatively common in northern states. Bastard is beloved in Maine and New Hampshire, and those states – together with a band across southern Arizona, New Mexico, and Texas – are the areas of particular motherfucker favour. Crap is more popular inland, fuck along the coasts. Fuckboy – a rising star* – is also mainly a coastal thing, so far.

I must admit that, while I’ve heard the last of these more than once, I don’t think I’ve ever used it in conversation. I use all the others except perhaps darn and douche with great frequency, although I typically use pussy in its derogatory rather than its anatomical sense. I’m right at home as a Southerner living in DC in my overuse of the f-word: 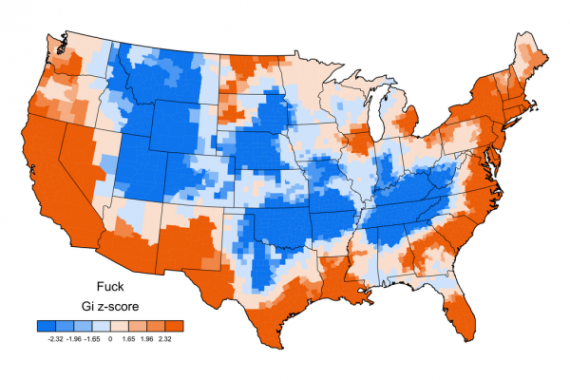 I very much lag the local trend in the rising compound: 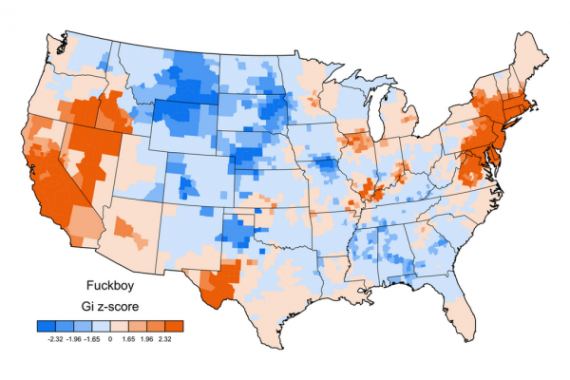 Additionally, I use asshole far more often and bitch far less than my heritage and current residence would predict. Lots more maps and commentary at Carey’s site.