David Plotz offers the following question about a crucial swing state: “Tennessee: Kerry can’t win it. But can Bush lose it?”

“There are three things I know about John Kerry,” says Randal Vinson. “First, that he speaks three or four languages, and one of them is French. Second, that he’s married to an ex-senator’s wife who’s worth a billion dollars. And third, he is supposedly a Vietnam vet.

An amusing quote, although a rather odd lede for the piece, since it’s noted later that Vinson is a hard core Republican.

Vinson, a 56-year-old retired computer programmer, is whiling away the afternoon at Troy’s Barbershop in Huntingdon, the county seat of Carroll County in northwest Tennessee. Carroll is the bellwether county in a bellwether state: Tennessee has voted for the winner in the last 10 presidential elections, and Carroll has picked right every time. Carroll is rural, white, and struggling. 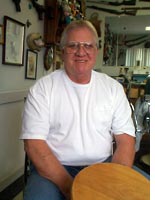 Vinson’s scorn shouldn’t trouble the Kerry campaign too much: He’s a lifelong Republican. But Kerry does need to worry about Tennesseans like Troy OatsvallÃ¢€”the Troy of Troy’s Barbershop. Oatsvall, who’s cut hair in Huntingdon for 40 years, never voted for a Republican presidential candidate before George W. Bush. He regrets his Bush vote, just not enough to check the box for Kerry. “I don’t like what Bush has done in Iraq. I don’t think one American boy is worth that whole country. But I don’t like Kerry. Did you ever meet someone and just not like the way he looks? That’s the way I feel about Kerry. I just don’t like the way he looks.” [Insert snarky comparative analysis of “looks” of Oatsvall and Kerry here.]

For three days in Tennessee, that is practically the nicest thing I hear about Kerry from a Democrat. Tennessee Democrats say Kerry wants to take their guns, that he’s more liberal than Al Gore, that they don’t know anything about him and don’t really care to, that the only reason to vote for him is that he isn’t Bush.

This makes Tennessee different from other states, how, exactly?

The rest of the piece is pretty interesting, actually. The problems both candidates are having in the Volunteer State are pretty indicative of the ones they’re having nationally. Also, there’s a photo of Republican Party Chairwoman Beth Harwell, who is much better looking than either Kerry or Oaksvald.