Taliban Says It Will Capture Or Kill Prince Harry 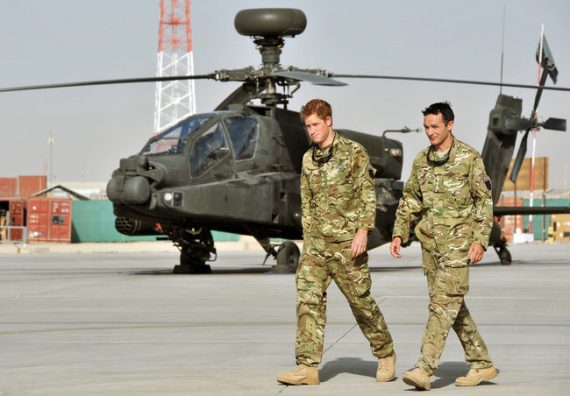 When I noted that Prince Harry had returned to Afghanistan recently for a tour of duty as an Apache helicopter pilot, I commented that I found it odd that the British military would publicize the Prince’s deployment given the threats against him that had caused them to withdraw him several years ago when his secret deployment was made public by, among others, Matt Drudge. One comment to that post noted that this deployment was different because Harry, officially designated as Captain Wales by the military, was not serving in a forward position this time. That’s a fair point, but flying Apache missions does expose one to enemy fire from time to time, and the Taliban have now said that they are targeting the man who is third in line to the British Throne:

KABUL (Reuters) – The Afghan Taliban said on Monday they were doing everything in their power to try to kidnap or kill Britain’s Prince Harry, who arrived in Afghanistan last week to fly attack helicopters.

Queen Elizabeth’s grandson is in Afghanistan on a four-month tour, based in Camp Bastion in the volatile Helmand province, where he will be on the front line in the NATO-led war against Taliban insurgents.

“We are using all our strength to get rid of him, either by killing or kidnapping,” Zabihullah Mujahid, a Taliban spokesman, told Reuters by phone from an undisclosed location.

“We have informed our commanders in Helmand to do whatever they can to eliminate him,” Mujahid added, declining to go into detail on what he called the “Harry operations”.

NATO Secretary-General Anders Fogh Rasmussen said he was not worried about the Taliban threat against Prince Harry.

“That’s not a matter of concern,” Rasmussen told a news conference in Brussels on Monday. “I mean, we do everything we can to protect all our troops deployed to Afghanistan whatever might be their personal background.”

Britain’s Ministry of Defense declined to comment on Mujahid’s statement. British authorities have given few details of Prince Harry’s stint in Afghanistan for security reasons.

It’s hard to tell how serious this threat is, of course. However, given the recent rise in “Green on Blue” attacks by seemingly friendly Afghan forces, one would hope that the British authorities are taking the threat serious both for the Prince’s sake and that of the soldiers he is serving with. Also, one wonders if his planned four month deployment will end up being shortened because of this.