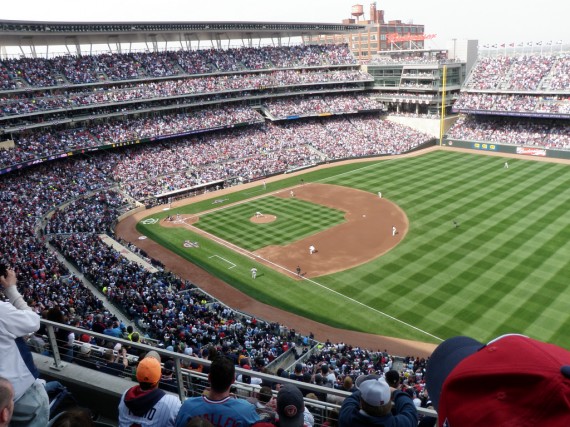 Scott Conroy at RealClearPolitics writes today about a sports stadium deal that calls into question the fiscally conservative image that Tim Pawlenty has built for his campaign:

As the Minnesota Twins prepared to square off against the Seattle Mariners on May 27, 2006, Gov. Tim Pawlenty donned a Twins jersey with his last name plastered across the back and strutted out onto the artificial turf of the Metrodome where he “delivered a speech like an athlete who’d just won his first championship,” according to the Star Tribune.

In the presence of team owner Carl Pohlad and former Twins greats such as Harmon Killebrew and Kent Hrbek, Pawlenty took a seat at an infield table and signed into law a bill authorizing construction of a $522 million outdoor stadium in downtown Minneapolis. The new law would guarantee that the team would remain in the Twin Cities after some ominous talk of relocation — and even contraction — had for years caused consternation among Minnesota’s baseball fans and business leaders with interests tied to the team.

More than a decade in the making, the stadium deal moved the Twins out of the stale, football-centric Metrodome, built in 1982, and into the more aesthetically pleasing and baseball-friendly Target Field, which opened to rave reviews in 2010.

Though the Twins agreed to pay approximately one-third of the cost, the rest of the bill was to be footed by a 0.15 percent sales tax hike in Hennepin County — a relatively small encumbrance on the state’s largest county, but an increased tax burden nonetheless. The bill was controversial, since the state legislature and Pawlenty took advantage of a 1997 law to grant the county board permission to enact the new tax without a voter referendum.

On the 2012 presidential campaign trail, Pawlenty has frequently touted his “A” grade from the libertarian-leaning Cato Institute and record of vetoing tax-hike packages, but the stadium deal could serve as an opportunity for his GOP rivals to make the case that Pawlenty’s fiscally conservative record is far from unblemished.

“Opponents can use this against him in a couple of ways,” Minnesota political analyst and Hamline University Professor David Schultz said. “How do we know that you’re not going to do the same thing as president of the United States and push unfunded mandates down to the states? And then secondly, you actually in the process wound up creating greater tax burdens on local governments.”

Even as Pawlenty wielded his veto pen to keep statewide taxes down during his eight years in office, critics frequently highlight his 75-cents-a-pack “health impact fee” on cigarettes and the massive projected deficit that he left his successor as proof that his record on fiscal issues was not as stellar as he has claimed.

The Twins stadium deal has thus far received scant attention in the national context, but the details of it could open Pawlenty up to further scrutiny over his peripheral role in seeing local taxes rise during his tenure.

Pawlenty is far from being the only politicians who has agreed to a boondoggle sports stadium deal in order to placate the demands of a franchise threatening to leave town, but this story does tend to undercut his argument that he governed Minnesota as a fiscally responsible manner. Even his CATO Institute “A” rating is decieving since, two years earlier, he had received a C on the same scorecard. Fiscal conservatives looking at Tim Pawlenty as their standard bearer would be wise to look behind the rhetoric to the reality, which seems to be far less than meets the eye.