I’m shocked–SHOCKED–that Robert Reich is advocating a tax increase on the wealthiest Americans. Nonetheless, he’s saying that’s what we need to pay for the war:

Neither the White House nor Congress is considering the best solution: a war tax on the wealthy. Raising taxes is politically unpopular. Bush has wanted only to cut taxes, especially on America’s wealthy. Yet, there’s a strong history of conservatives and Republicans who have embraced war taxes as the fairest and best way to finance the costs.

Traditionally during wartime, taxes have been raised on top incomes to pay the extra costs of war. The estate tax — overwhelmingly paid by wealthy families — was imposed by wartime Republican presidents Abraham Lincoln and William McKinley. It was maintained through World War I, World War II, the Korean War, Vietnam and the Cold War. Now, the estate tax is being phased out, at least until 2011, as part of the tax cut of 2001.

The top income tax rate rose during World War I to 77%. In World War II, it reached more than 90%. In 1953, with the Cold War raging, Republican President Dwight Eisenhower refused to support a Republican move to reduce it. By 1980, it was still way up there, at 70%. Then Ronald Reagan slashed it to 28%, giving us the lowest top tax rate of all modern industrialized nations. Because Reagan kept spending record sums on the military, the federal deficit ballooned. A few years after that, the Berlin Wall came down, ending the Cold War. We congratulated ourselves and then faced the largest budget deficit since World War II.

Besides, the very richest Americans benefit disproportionately from a stable federal government that protects their property and maintains public tranquility.

I’d note that, when Lincoln and McKinley were president, there was no federal income tax. And a large part of the reason that the estate tax remained in effect even during peacetime was simple inertia: it was a stream of revenue that required no action.

The notion that the wealthy benefit more from stopping terrorist attacks reminds me of the joke headline, “World to End Tomorrow — Poor and Minorities Hardest Hit.” Reich’s rationale is interesting, though:

It is the least the wealthy can do when so many others are sacrificing for the nation. Most wealthy kids never come near a front line. During the first Gulf War, enlistment rates for children of the richest 15% were one-fifth of the national average. Charles Moskos, a sociology professor at Northwestern University and expert on military affairs, notes that in his 1956 Princeton class, 450 of 750 men served in the military. In those days, America still had a draft. Last year, only three of Princeton’s 1,000 graduates served.

I’d observe that most of the children of those in the bottom 85% of the income brackets don’t serve in the military, either. Further, if the problem is a lack of fairness in the economic distribution of military service, I fail to see how a tax increase solves it–other than moving those slightly above the 15% cut-off to slightly below it given the differential tax rates at the margins. But sending a few thousand extra dollars to Washington is hardly the same level of sacrifice as sending one’s child off to die.

The overall notion that raising taxes during wartime in order to spread the burden is defensible. On the other hand, cutting spending on domestic programs during wartime is another form of burden sharing. But, in any case, the argument should be made on economic grounds rather than on the rather tired rhetoric of class warfare. 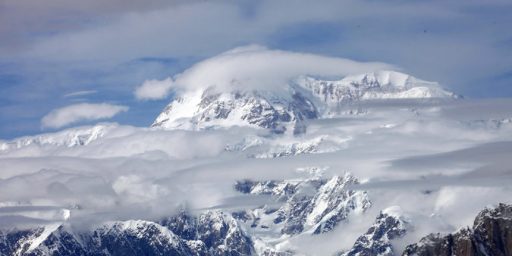