Even as it faces an increasingly successful electoral challenge from other factions of the Republican coalition in the 2014 primaries, an new poll finds that the Tea Party has hit its lowest level of support recorded, and that even Republicans have turned against the movement:

In the past three and a half years, levels of support and opposition for the Tea Party among Democrats and Democratic-leaning independents have changed relatively little.

These data are from a April 24-30 Gallup survey and underscore both the existing division of opinion in relationship to the Tea Party among Republicans and the shift in support since the last midterm election.

The role of the Tea Party in the selection of Republican nominees for Senate and House seats this year continues to be a high-profile issue. The Tea Party was perceived as suffering a setback on Tuesday, when Thom Tillis, the candidate widely perceived as representing the GOP establishment in the North Carolina Republican Senate primary, soundly defeated Greg Brannon, who was positioned as the Tea Party’s choice. Tillis will now face incumbent North Carolina Democratic Sen. Kay Hagan in the fall general election.

The drop in support for the Tea Party among Republicans is mainly responsible for the drop in support among all Americans since November 2010, from 32% to today’s 22%. Support has fluctuated in the intervening time period, but has been remarkably steady at 22% in the last three Gallup polls conducted since September of 2013. The percentage of Americans who classify themselves as Tea Party opponents, however, has risen to 30%, tied with two measurements in 2010 as the highest in the history of tracking this question.

As the graph below indicates, support for the Tea Party has been at essentially the same level for the past two years or so, so hitting another low is sort of unremarkable. What has shown an interesting increase in the past several months, though, is the number of people who identify as opposed to the movement: 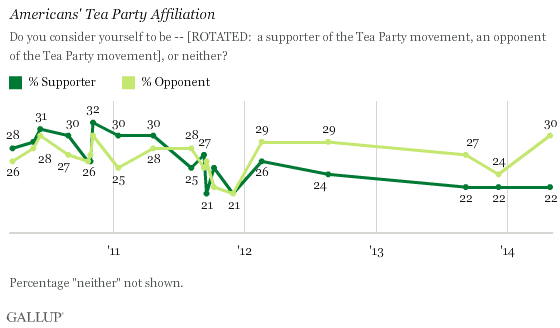 The Tea Party’s relative unpopularity outside of the Republican Party isn’t much of a surprise, of course. While it was purported to have started out as a non-partisan movement, it became fairly obvious fairly quickly that the Tea Party was, in the end, little more than the activist wing of the hard right of the Republican base. This can be seen both in the candidates that the movement has supported over the years and in the manner in which the groups associated with it have attempted to use the populism of the movement to influence, if not completely control, the agenda of the Republican Party in Washington and at the state level. Quickly, the Tea Party became indistinguishable from the GOP itself. So, it’s not entirely surprising that most Democrats view the movement negatively and that most independents (73% in the Gallup poll) don’t have any real opinion on the movement at all.

What is somewhat surprising, though, is the fact that only 41% of self-identified Republicans considering themselves a supporter of the Tea Party. After all, this is the movement that has arguably led to success that the GOP saw in 2010, and which will no doubt play a role in the 2014 elections as well. While the poll doesn’t go into any detail about what might be motivating this change of mind among Republicans, it seems as though there are a few likely causes that we can look to. First of all, there’s the fact that the Tea Party has had a history from the start of backing and promoting candidates who end up harming the party as a whole, and in at least several well known cases, arguably causing the party to lose a chance at controlling the Senate on two occasions. Second, on several occasions over the past several years the Tea Party has pushed the Congressional GOP to taken positions that brought the nation to the brink of debt default in 2011 and sent it through a completely pointless government shutdown just last October. Finally, as I’ve noted before, many of the organizations that have grown to raise money off the Tea Party movement have spent more time attacking fellow Republicans than attacking fellow Democrats. Given all of that, it’s not surprising that more mainstream Republicans, including some conservatives, have becoming less supportive of the Tea Party over time. It’s also not surprising that the “establishment” war against Tea Party candidates in the 2014 primaries have, so far, been quite successful. In the long run, the Tea Party has proven itself to be detrimental to the long term interests of the GOP, and now Republicans seem to be waking up to that fact.