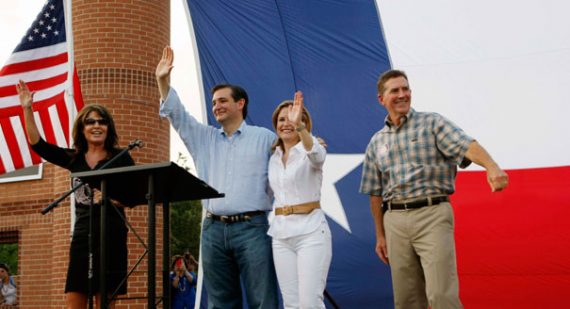 Some two months ago, Texas Lt. Governor David Dewhurst failed to receive 50% of the vote in Texas’s GOP Senate primary for the seat held by the retiring Kay Bailey Hutchinson. This sent  him into a runoff with former State Solicitor General and Tea Party favorite Ted Cruz. While Dewhurst lead Cruz by ten percentage points, and nearly 150,000 votes, in the May 30th primary, it now looks like Cruz is in good shape to score what is likely to be seen as the biggest Tea Party upset since Richard Mourdock beat Dick Lugar in Indiana earlier this year:

HOUSTON — Ted Cruz is on the cusp of a win in the Texas Republican Senate runoff that would shatter conventional campaign wisdom and elevate him as one of the brightest stars of the tea party generation.

Yet in the closing days of this dead-of-summer contest in a sprawling superstate, Cruz’s flinty campaign had all the trappings of a celebration, with the 41-year-old constitutional lawyer being feted by the country’s most prominent conservatives, including Sarah Palin, Rick Santorum and Sens. Jim DeMint and Rand Paul.

“We’re on the 2-yard line. We have marched the entire length of the field. We started out up in the hot dog stands,” Cruz joked Friday evening in a suburban park where hundreds flocked to see Palin. “But we are facing a battle to push it those final two yards. Do the grass roots matter? This race is the test for that proposition.”

Despite being outspent more than 3-to-1, having never run for office and being tasked with penetrating the Lone Star State’s 20 media markets with virtually zero name recognition, Cruz is well positioned to upset Lt. Gov. David Dewhurst Tuesday. It’s a scenario that would send shockwaves through the political elite and embolden the thousands of conservatives from across the country who have descended here to help push him over the finish line.

It’s one thing for a tea party candidate to swipe away an individual House seat or dominate a party convention in a small state, but a statewide win in supersize Texas would be a new high-water mark.

“Dewhurst had every advantage you can have. What Cruz has done to this point was once unthinkable and is now remarkable. He will be an overnight star if he wins, which he is favored to do right now,” said Austin-based GOP consultant Matt Mackowiak, a Cruz supporter and former press secretary to retiring Sen. Kay Bailey Hutchison.

The two most recent public polls have shown Cruz ahead. And a Dewhurst ally with knowledge of an internal survey separate from the campaigns told POLITICO his preferred candidate was trailing by high single digits heading into the weekend.

“I think [Dewhurst’s] done,” said the Republican who shared the information in exchange for anonymity. “It’s Nebraska, Indiana. You just smell it. He’s toast.”

Based on the polls that seems pretty likely. Additionally, history suggests that turnout for tomorrow’s runoff election is likely to be below that for May 30th, which arguably is to Cruz’s advantage given the fact that he seems to have the most energized supporters at this point. Dewuhurst shouldn’t be counted out, of course, he nearly won the primary and has been elected statewide before. He also has the support of much of the Texas GOP leadership, including Governor Rick Perry. Additionally, his record is such that it seems hard to paint him as an out of touch moderate the way Mourdock did with Lugar. But Cruz seems to have all that momentum right now, and that’s what matters going into an election like this.

The Washington Post’s Sean Sullivan notes what a Cruz victory would mean:

A Cruz win would not only be a major rebuke of the well-known (and VERY well financed) Dewhurst, but it would also arguably be the most significant statewide upset of the 2012 cycle to date. (Yes, we’re talking about the same cycle in which a sitting senator was dislodged in Indiana and a little-known state legislator won the GOP Senate nomination in Nebraska.)

There are three key reasons for this.

For starters, Dewhurst didn’t implode. He raised heaps of money and added millions from his own checkbook. He began with a huge name identification advantage, was backed by Gov. Rick Perry, and enlisted the help of David Carney, one of the sharpest political minds in Texas. And he was the beneficiary of a super PAC headed by Rob Johnson, another top Texas GOP hand.

By contrast, Sen. Richard Lugar (R-Ind.) ran a lackluster operation which was slow to respond to a lingering story about his out-of-state residency and plagued by a record that enraged conservatives. In Nebraska, frontrunning GOP Attorney General Jon Bruning was beleaguered by ethics questions and gaffe-prone behavior. The errors both men made opened them up to upstart challengers. Dewhurst didn’t make those same sort of mistakes.

Both Bruning and Lugar were also dogged by charges of being insufficiently conservative. Dewhurst was too, but those assaults were less fair. Bruning supported confirming Eric Holder as Attorney General while Lugar’s work across the aisle won him (toxic) praise from Democrats. But Dewhurst showed no signs he’d be anything but a reliable Republican vote in the Senate.

A Cruz victory would suggest that Republican voters aren’t just rejecting inadequately conservative candidates and longtime incumbents. The sufficiently conservative who are tied the establishment — a word becoming more and more toxic in politics — are also at risk.

A Tuesday win by Cruz would mean just about every candidate left in a GOP primary who is challenging a frontrunner tied in ANY way to the establishment will do everything they can to compare their candidacy to Cruz’s.

Perhaps fortunately for those candidates, there aren’t many of those primaries left. However, this is likely a trend we’ll see continuing into 2014.

Regardless of who wins tomorrow, the seat is likely to remain in Republican hands. Early polling has shown both Dewhurst and Cruz leading Democratic nominee Paul Sadler and, of course, this is Texas. The state is going to go for Mitt Romney in November, and the coattails are likely to carry whoever the nominee is over the finish line. If that person turns out to be Cruz, though, he’ll be another Tea Party face in the Senate along side the likes of Rand Paul, Mike Lee, and Jim DeMint. That’s starting to sound like a caucus to me.