Apple's "1984" Super Bowl commercial ran only once, but it remains in a class by itself. 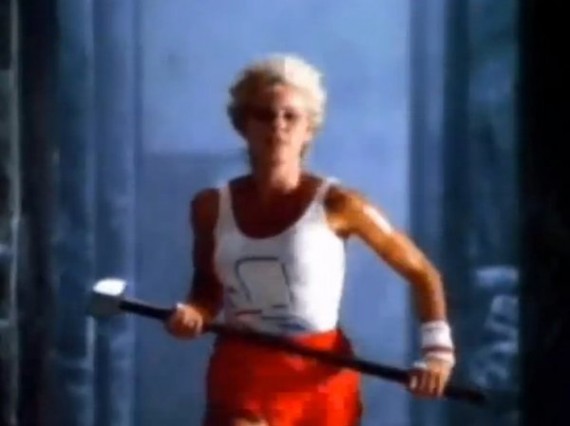 Once again this year, the Super Bowl is bringing anticipation  not only for the game itself but also, in what has become what can only be described as something that Don Draper could only have dreamed about, the commercials that will be run during breaks in the game. According to reports, thirty seconds of commercial time during the game this year will cost an advertiser upwards of $4,000,000, although there are apparently exceptions to that rule for advertisers who but multiple spots during the game. That makes this yet another year in which the cost of running an ad has increased over what it cost the previous year. Given the fact that we’re talking about an event that will likely once again break all time viewership ratings, and the fact that the fracturing of the media world into multiple cable networks and online streaming viewing opportunities, it’s not surprising that networks like Fox, along with the NFL, would seek to capitalize on the eagerness of advertisers to get as many eyeballs as possible or that advertisers would eagerly put the money on the table.

Perhaps the most interesting part of all of this is the extent to which the commercials themselves have become part of the shared cultural experience of Super Bowl Sunday. In addition to recapping the game, tomorrow morning’s coverage on shows like Today and Good Morning America, along with the morning shows on the three cable news networks, will once again focus on the commercials and, in many cases, play video of those commercials either in whole or in part, thus giving advertisers even more bang for their buck. In recent years, advertisers have gotten into the game even further by utilizing websites such as YouTube to re;ease preview versions of the commercials they’ll be running during the game, or indeed the entire commercial itself as Budweiser did several days ago with its “Puppy and Clydesdale” commercial.

Notwithstanding all the money and all the talk, though, Michael Hiltzik at The Los Angeles Times contends that a commercial that ran thirty years ago during Super Bowl XVIII remains the best Super Bowl commercial ever:

Of course it’s Apple’s “1984” ad for the original Macintosh computer.

The ad ran in its full 60-second length only once on national television–during the third quarter of Super Bowl 18, on Jan. 22, 1984. (It was shown a month earlier on a TV station in Twin Falls, Idaho, to preserve its eligibility for advertising awards, and subsequently with previews in some movie theaters.)

Directed by Ridley Scott, who already had “Alien” and “Blade Runner” under his belt, this is the ad that created the Super Bowl’s annual commercial frenzy that today bores so many of us silly. For 30 years, ad agencies and their clients have been trying to top it, but no one has come close. Instead we’ve gotten three decades of (let’s face it) lame disappointments–funny ads, emotional ads, sexy ads, animated and live-action ads, glossily professional and do-it-yourself ads. Yawn.

Judging TV commercials by their artistic content is often an exercise in condescension, but there’s no denying that Ridley Scott’s product is a marvel of concise storytelling (and marketing). That the ad ran in 1984 was happenstance, but Apple’s ad agency, Chiat/Day, certainly made the most of the confluence with Orwell’s “1984.” The ad featured gray-garbed drones marching in step to a Big Brother’s Stalinist harangue, interrupted by a lithe tank-topped blond chased by storm troopers. Just before fade-out comes the pitch: “On January 24, Apple Computer will introduce Macintosh. And you’ll see why 1984 won’t be like ‘1984.’”

It’s hard to think of a television commercial whose history is so thoroughly documented as “1984.” A chronicling by veteran Apple historian Owen Linzmeyer can be found here. The hardest part to cast, the rebellious blond, went to a British discus thrower named Anya Major because she could spin around to launch her liberating mallet at the video image of Big Brother without getting dizzy.

Hiltzik goes on to note that the ad almost didn’t run.  While Apple founder Steve Jobs loved the concept, CEO John Scully and much of the Board of Directors did not. This was, you’ll recall, the point in Apple’s tumultuous early history when Jobs was on his way to being forced out the door of the company he had co-founded with Steve Wozniak (who even at that point had largely removed himself from day-to-day operations at the company), only to return triumphantly a decade later and, after some fits and starts, move the company into the 21st century company we know today. In the end, Apple’s marketing executives decided to go forward with the ad, and the rest his history.

Is Hiltzik right that this is best Super Bowl commercial in history? Well, for one thing it’s kind of hard to say otherwise when you’re talking about something that was directed by someone who has been nominated for, and won, the most prestigious awards in filmmaking and is the man behind such mega-hits as Alien, Blade Runner, and Gladiator. It’s also hard to think of any single commercial that people still talk about thirty years after it aired, although the Lyndon Johnson “Daisy” ad, which turns fifty years old this year, may be one exception to that rule. When it comes to Super Bowl commercials, though, the Apple “1984” ad remains iconic and, indeed, seems to have become part of the culture itself.

So, yes, I’ll have to agree with Hiltzik on this one. Apple and Ridley Scott together created what remains the best Super Bowl commercial ever.