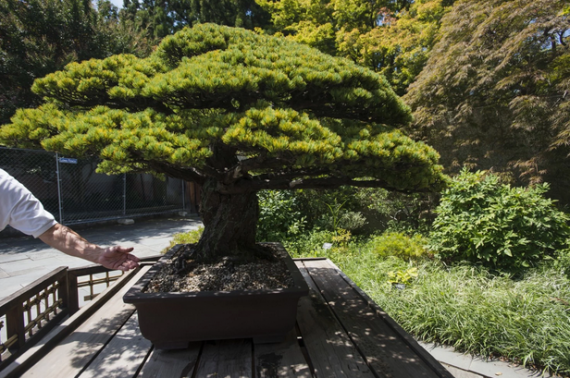 A bonsai tree that is believed to be at least 390 years old survived the atomic bomb that was dropped on Hiroshima 70 years ago this week:

Moses Weisberg was walking his bicycle through the National Arboretum in Northeast Washington when he stopped at a mushroom-shaped tree. The first thing he noticed was the thickness of the trunk, estimated at almost a foot and a half in diameter. And then there was the abundance of spindly leaves, a healthy head of hair for a botanical relic 390 years old.

But it was only when he learned the full history of the tree, a Japanese white pine donated in 1976, that he was truly stunned. The tree, a part of the Arboretum’s National Bonsai and Penjing Museum, has not only navigated the perils of age to become the collection’s oldest, but it also survived the blast of an atomic bomb, Little Boy, dropped over Hiroshima, Japan, during World War II.

“For one, it’s amazing to think that something could have survived an atomic blast,” said Weisberg, a 26-year-old student at the Georgetown University Law Center. “And then that by some happenstance a Japanese tree from the 1600s ended up here.”

The bonsai tree’s history is being honored this week, as Thursday marks the 70th anniversary of the Hiroshima bombing. But visitors can see the tree as part of the museum’s permanent collection throughout the year.

The tree, donated by a bonsai master named Masaru Yamaki, was part of a 53-specimen gift to the United States for its 1976 bicentennial. Little was known about the tree until March 8, 2001, when — with no advance notice — two brothers visiting from Japan showed up at the museum to check on their grandfather’s tree.

“I find it amazing that Masaru Yamaki could give a priceless bonsai basically to his enemy and not say a word about it,” said Felix Laughlin, president of the nonprofit National Bonsai Foundation. “I get emotional just talking about it.”

Shigeru Yamaki and his brother, Akira, filled in the blanks for museum officials, though they had never seen the tree before their visit and had only heard about it through family stories. News footage taken at the Yamaki Nursery after the blast shows the pine sitting unscathed in the background.

Ensuring the continued survival of such an important piece of the collection is no easy task. It falls to Jack Sustic, who has been the curator of the Bonsai and Penjing Museum since 2002.

Bonsai, Sustic said, refers not to the type of tree but rather the manner in which it is cared for. It is the blending of nature and art, he said.

The care includes seeing that it is watered daily, inspected for insects, rotated for the sun twice a week and repotted on occasion.

In the winter, the tree is moved to the museum’s climate-controlled Chinese Pavilion. Currently, it sits in the museum courtyard.

“One of the things that makes it so special is, if you imagine, somebody has attended to that tree every day since 1625,” Sustic said. “I always like to say bonsai is like a verb. It’s not a noun; it’s doing.”

And apparently, doing it well enough so the tree survives an atomic bomb blast.