Huge swaths of the country are underserved.

Writing for The Verge, By Russell Brandom and William Joel take a county-by-county look at the broadband gap, showing what parts of the country have less than 15 percent of the population receiving nominally high-speed Internet access at home. Their premise:

If broadband access was a problem before 2020, the pandemic turned it into a crisis. As everyday businesses moved online, city council meetings or court proceedings became near-inaccessible to anyone whose connection couldn’t support a Zoom call. Some school districts started providing Wi-Fi hotspots to students without a reliable home connection. In other districts, kids set up in McDonald’s parking lots just to get a reliable enough signal to do their homework. After years of slowly widening, the broadband gap became impossible to ignore.

Their work produced the map above, which is static in my capture but interactive at the link.

Specifically, the colored-in areas show US counties where less than 15 percent of households are using the internet at broadband speed, defined as 25Mbps download speed. (That’s already a pretty low threshold for calling something “high-speed internet,” but since it’s the Federal Communications Commission’s standard, we’ll stick with it.)

Honestly, 15 percent strikes me as much more problematic than 25Mbps. If 84 percent of households are without broadband, that’s terrible, not a win.

Maps like this are important because, for much of the past decade, the scale of the problem has been maddeningly difficult to pin down. Most large-scale assessments of American broadband access rely on FCC data, a notoriously inaccurate survey drawn from ISPs’ own descriptions of the areas they serve. Even as the commission tries to close the broadband gap, its maps have been misleading policymakers about how wide the gap really is.

Instead of the FCC’s data, we drew on an anonymized dataset collected by Microsoft through its cloud services network, published in increments by the company over the past 18 months. If the FCC monitors the connections that providers say they’re offering, this measures what they’re actually getting. You can roll over specific counties to see the exact percentage of households connected at broadband speed, and the data is publicly available on GitHub if you want to check our work or drill down further.

The disparity between FCC reports and the Microsoft data can be shocking. In Lincoln County, Washington, an area west of Spokane with a population just a hair over 10,000, the FCC lists 100 percent broadband availability. But according to Microsoft’s data, only 5 percent of households are actually connecting at broadband speeds.

As they point out, much of this is about the business model of broadband distribution in America.

Nine counties in Nevada fall under the 10 percent threshold, covering more than 100,000 people and the bulk of the area of the state. Most of Alaska is a similar dead zone — understandably, given how rugged the state’s interior is — but similar gaps pop up in southwest New Mexico or central Texas.

Because it’s measuring usage, this data doesn’t distinguish between people who can’t buy a fast connection and people who simply can’t afford one, and in other places, you can see the connectivity problem as one more consequence of accumulated neglect. In Arizona, Apache County stands out as a long thin stripe in the northeast corner of the state, showing just 5 percent broadband usage. More than 70,000 people live there, most of them members of the Navajo, Apache, or Zuni tribes. According to the census, more than 23,000 of them are living in poverty, by far the highest poverty rate in the state. Across the border, San Juan County, New Mexico, shows 29 percent broadband usage, so the problem isn’t that the county is too remote or that the terrain is too difficult to manage. Apache County is simply poor, and the slow progress of the broadband buildout seems like a promise it will stay that way.

With the right eyes, you can even see the broadband gap as a dividing line for the US at large. Counties on the wrong side of the line are poorer and more remote, losing population even as the country grows. This is why there’s no broadband, of course: from a business perspective, building out fiber in Apache County is a losing bet. But the lack of fiber also stifles economic activity and makes young people more likely to leave, creating a cycle of disinvestment and decay that has swallowed large portions of our country.

In Fairfax County, Virginia, where I live, 92 percent of households have broadband. In neighboring Loudoun County, where I lived when I moved to the area (and home of AOL, Verizon, and other big tech companies) it’s 98 percent. In Pike County, Alabama, where I lived before moving here, it’s only 18 percent, despite Troy University accounting for a significant chunk of its population. (And, yet, Pike County is still above the 15 percent threshold, and thus not highlighted as a problem).

One caveat to all of this is that this doesn’t seem to account for people who have high-speed connections via their mobile devices. I would imagine there is a significant chunk of relatively-well-off households, particularly younger ones, who simply see no need for a separate service when the can just stream Netflix on their iPads.

In theory, this is a problem the federal government is getting ready to fix. President Biden has proposed $100 billion in broadband funding as part of the American Jobs Plan, more than twice what the FCC estimated would be necessary to bring broadband to 98 percent of households. But it will be a long walk from appropriating that money to actually laying fiber in places like Apache County. That road starts with taking a long look at the shaded parts of this map and thinking about what it will take to truly get them online.

While “laying fiber” strikes me as an outdated approach, it does indeed still seem to be the only way currently available to distribute truly high-speed, reliable service. There are cheaper, faster-to-implement wireless options but they’re slower and have significantly more latency. 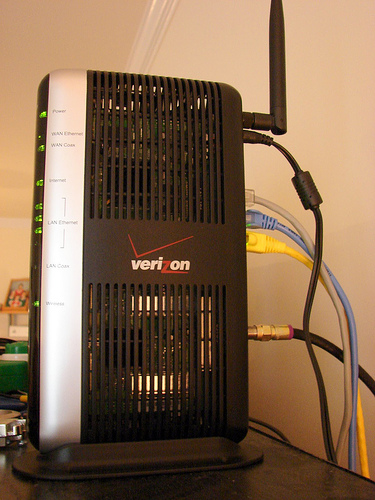 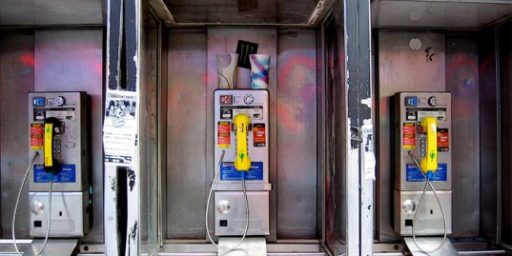