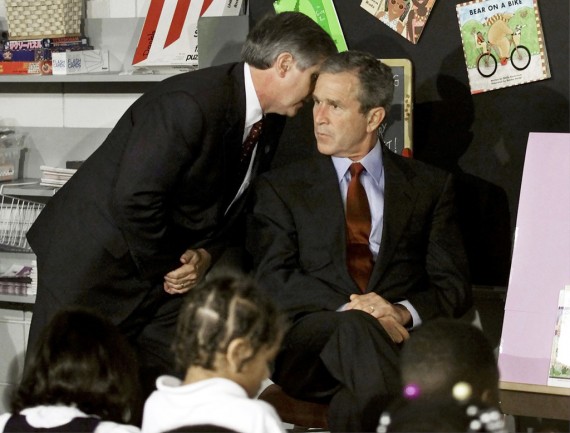 Time Magazine has an interesting piece as part of its special edition on the death of Osama bin Laden about the children who were with President Bush when first learned of the September 11th attacks:

There has rarely been a starker juxtaposition of evil and innocence than the moment President George W. Bush received the news about 9/11 while reading The Pet Goat with second-graders in Sarasota, Florida.

Seven-year-olds can’t understand what Islamic terrorism is all about. But they know when an adult’s face is telling them something is very wrong — and none of the students sitting in Sandra Kay Daniels’ class at Emma E. Booker Elementary School that morning can forget the sudden, devastated change in Bush’s expression when White House Chief of Staff Andrew Card whispered the terrible news of the Al Qaeda attack. Lazaro Dubrocq’s heart started racing because he assumed they were all in big trouble — with no less than the Commander-in-Chief — but he wasn’t quite sure why. “In a heartbeat he leaned back and he looked flabbergasted, shocked, horrified,” recalls Dubrocq, now 17. “I was baffled. I mean, did we read something wrong? Was he mad or disappointed in us?”

All sorts of similar kid fears started running through Mariah Williams’ head. “I don’t remember the story we were reading — was it about pigs?” says Williams, 16. “But I’ll always remember watching his face turn red. He got really serious all of a sudden. But I was clueless. I was just seven. I’m just glad he didn’t get up and leave because then I would have been more scared and confused.” Chantal Guerrero, 16, agrees: even today she’s grateful that Bush regained his composure and stayed with the students until The Pet Goat was finished. “I think the President was trying to keep us from finding out,” says Guerrero, “so we all wouldn’t freak out.”

One thing they’d like to tell Bush’s critics — like liberal filmmaker Michael Moore, whose 2004 documentary Fahrenheit 911 disparaged Bush for lingering almost 10 minutes with the Booker students after getting word that two planes had crashed into New York’s World Trade Center — is that they think the President did the right thing. “I think he was trying to keep everybody calm, starting with us,” says Guerrero. Dubrocq agrees: “I think he was trying to protect us.” Booker Principal Gwendolyn Tose’-Rigell, who died in 2007, later insisted, “I don’t think anyone could have handled it better. What would it have served if [Bush] had jumped out of his chair and ran out of the room?”