Clearly there's a large ambiguity in the Constitutional gap between the two separate war-related powers of Congress and the Executive. The WPA can be seen as an attempt to resolve it but can't if it's unconstitutional. 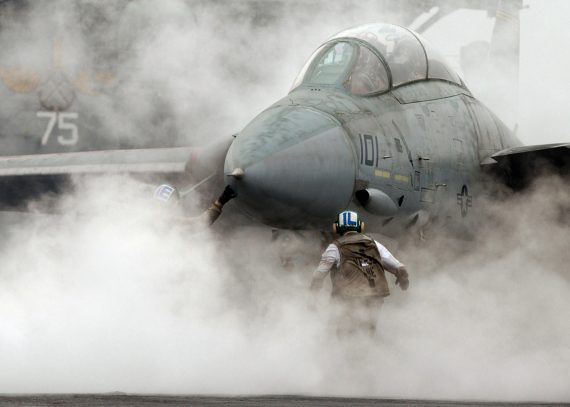 Andrew McCarthy, like pretty much every President since Nixon’s veto was overridden, argues that the constitutionality of the War Powers Resolution (50 U.S.C. 1541 et seq., commonly called the War Powers Act) is deeply suspect:

I’d answer the parenthetical question in the affirmative. But that’s all but irrelevant to the thornier issue of the WPA’s general Constitutional infirmity. The Founders envisioned each of the co-equal branches interpreting the Constitution on their own. The notion that time and the political process would tend to lead to optimal solutions suited their overall scheme of providing a general document setting forth the powers and limits on government rather than an all-encompassing one that dealt with every scenario imaginable.

Marbury v. Madison merely provided the missing arbiter of last resort for most such inter-branch tensions. It didn’t eradicate it. And, as Mr. McCarthy notes, some questions are inherently non-justiciable (though I am not as certain as he is that this is one of them).

Position is policy. Presidents qua Commanders-In-Chief naturally have a broader view of their power and authority (a nice distinction made by Mr. McCarthy) than Congress, in which the power to declare war and pay for its instrumentalities is vested. And clearly there’s a large ambiguity in the Constitutional gap between the two separate functions. The WPA can be seen as an attempt to resolve it. But it cannot do so if it is itself unconstitutional.

And it is. As Schoolhouse Rock taught us all, bills only become laws when they get signed by the President (or a veto overridden). That the Founders imagined war as something that usually happens slowly and with plenty of time to gather and debate speaks both to their agrarian mindset and their entirely laudable belief that that’s the only way wars should happen. One could argue that the modern world of instantaneous global communication and fast-rising threats render that faith as outdated as its socio-political context. But even if that were true, the proper means of updating the Constitution is the one set forth within it, not by passing laws that, on their face, abrogate proper Constitutional process.

The question also arose when Clinton was ignoring the WPA in Kosovo on the grounds that Congress had funded, and therefore implicitly approved, it. But since the WPA expressly states that appropriations for military action do not constitute such WPA approval, Clinton’s argument was simply a frivolous cover for doing as he wished.

Obama’s assertion that the handing off of leadership in Libya to NATO obviates the need for WPA approval fares even worse. That US involvement is allegedly “limited” does not nullify the applicability of the WPA. American military forces are still engaged; ergo it falls within the ambit of the statute. Likewise Reagan’s attack on Libya and Bush I’s Somalia incursion (contrast to Bush II who, for all that he was so often accused of “rushing to war,” actually spent months making his case, and securing Congressional authorization, for invading Iraq).

So the brazenness with which the President has ignored the statute has forced the question upon us again. Contrary to Mr. McCarthy (and others), I don’t think one can say that the WPA has been rendered a dead letter by Obama’s “kinetic military action” in Libya. It is, after all, still on the books. Had he chosen to forthrightly assert the Executive’s inherent authority rather than resorting to nonsensical semantics and sophistry about the chain of command, that argument might be stronger. But he has made it very difficult indeed to continue to ignore the WPA’s Constitutional handicaps.

The solution to the real problem here, as is so often the case, is to restore the Founders’ vision: Desist from trying to be the world’s policeman and ressurect our general pre-WWII attitude that we only go to war deliberately. That can only be done by following the process the Founders envisioned. Slapping a Band-Aid on an inconvenient ambiguity does more violence to the Constitution than it cures.