The FARC Makes the Official Transition to Political Party

A key step in the Colombian peace process.

There remain two camps within the FARC — one seeking a broader coalition of the left, the other more rooted in the group’s revolutionary past. In a nod to its roots, the FARC this week announced that rather than pick a substantially different name for its new political party, it will still be known by the acronym FARC — although it will now stand for Alternative Communal Revolutionary Force.

Yet there is no doubt the group is trying to carve out a new image. On Friday, for instance, a panel of blazer-wearing FARC leaders arrived at a news conference clutching red roses — a flower they hoped to convert into a symbol of their new party.

“When [people] see a red rose, we want them to think of the FARC,” said Ivan Marquez, the group’s chief negotiator during the peace process.

Former leftist guerrillas in other Latin American countries including Brazil and Uruguay have gone on to reach the highest offices in the land. Yet Colombia’s guerrilla wars were longer and far more violent, claiming an estimated 218,000 lives.

The FARC, though, may be making some political inroads. A recent Gallup poll showed the group with 15 percent support, compared with 10 percent in June of last year. The latest numbers were only a few percentage points lower than the approval rating of Colombia’s congress.

The Bogotá Post has a better translation of the name:

The disarmed guerilla group changed their name to the Fuerza Alternativa Revolucionaria del Común (Alternative Revolutionary Force for the Common People) – controversially keeping the same acronym, FARC, which has been synonymous with the country’s bloody past for over half a century.

The party’s new logo features a red rose with a star in the middle. Their former logo was two rifles crossed over a book.

Retaining the acronym is not a surprise.  It mirrors what the EPL in Colombia when it demobilize and became a party in 1991 (becoming Esperanza, Paz y Libertad).  A prominent region example would be the FMLN in El Salvador.

On the one hand, I can see the point that using the name “FARC” would be controversial.  However, if one is not in suppose of the group, one is unlikely to vote for their party no matter what it is called.  On the other, if one is a supporter, the lack of ambiguity is a plus, especially given the number of parties which compete in Colombian elections.

Note the 2014 Senate ballot with nine parties in the main section and another fourteen for the seat-aside seat for indigenous groups: 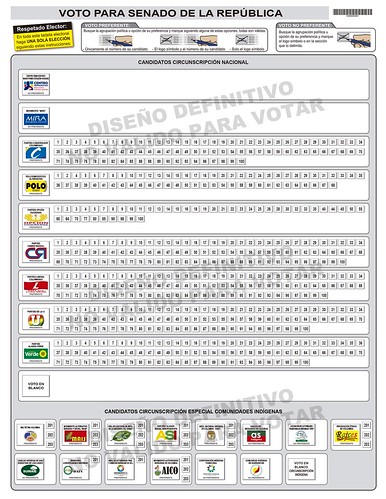 In a context such as this, anything that differentiates a party is useful.

In regards to public sentiment, the Guardian notes the following Gallup poll:

The party now faces an uphill battle for political acceptance in a country taught to see its members as a terrorist threat after decades of kidnappings, bomb attacks and extortion.

But a Gallup poll published on 31 August showed that Colombians find Farc slightly more palatable than the country’s traditional political parties. While Farc has an 84% disapproval rating, 87% disapprove of the other political parties, discredited by corruption scandals.

The new Farc party hopes to capitalise on that. “We will fight against corruption and the rot of those who have been governing our country,” said Pablo Catatumbo, another Farc leader.

The FARC are guaranteed five seats in each chamber of the Colombian congress in 2018 and 2022.  If they earn enough votes beyond those five, they are entitled to those seats as well.