David Blight recounts the story of the first Memorial Day. 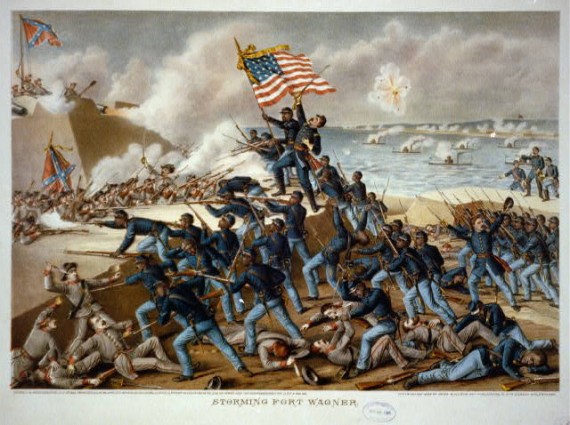 David Blight reminds us, on this day of remembrance, of what the first Memorial Day was about.

But for the earliest and most remarkable Memorial Day, we must return to where the war began. By the spring of 1865, after a long siege and prolonged bombardment, the beautiful port city of Charleston, S.C., lay in ruin and occupied by Union troops. Among the first soldiers to enter and march up Meeting Street singing liberation songs was the 21st United States Colored Infantry; their commander accepted the city’s official surrender.

Whites had largely abandoned the city, but thousands of blacks, mostly former slaves, had remained, and they conducted a series of commemorations to declare their sense of the meaning of the war.

The largest of these events, forgotten until I had some extraordinary luck in an archive at Harvard, took place on May 1, 1865. During the final year of the war, the Confederates had converted the city’s Washington Race Course and Jockey Club into an outdoor prison. Union captives were kept in horrible conditions in the interior of the track; at least 257 died of disease and were hastily buried in a mass grave behind the grandstand.

After the Confederate evacuation of Charleston black workmen went to the site, reburied the Union dead properly, and built a high fence around the cemetery. They whitewashed the fence and built an archway over an entrance on which they inscribed the words, “Martyrs of the Race Course.”

The symbolic power of this Low Country planter aristocracy’s bastion was not lost on the freedpeople, who then, in cooperation with white missionaries and teachers, staged a parade of 10,000 on the track. A New York Tribune correspondent witnessed the event, describing “a procession of friends and mourners as South Carolina and the United States never saw before.”

The procession was led by 3,000 black schoolchildren carrying armloads of roses and singing the Union marching song “John Brown’s Body.” Several hundred black women followed with baskets of flowers, wreaths and crosses. Then came black men marching in cadence, followed by contingents of Union infantrymen. Within the cemetery enclosure a black children’s choir sang “We’ll Rally Around the Flag,” the “Star-Spangled Banner” and spirituals before a series of black ministers read from the Bible.

After the dedication the crowd dispersed into the infield and did what many of us do on Memorial Day: enjoyed picnics, listened to speeches and watched soldiers drill. Among the full brigade of Union infantrymen participating were the famous 54th Massachusetts and the 34th and 104th United States Colored Troops, who performed a special double-columned march around the gravesite.

The war was over, and Memorial Day had been founded by African-Americans in a ritual of remembrance and consecration. The war, they had boldly announced, had been about the triumph of their emancipation over a slaveholders’ republic. They were themselves the true patriots.

Yes they were. Don’t let the defenders of the slavemongering secessionists of the Confederacy tell you any different. The Confederate cause wasn’t merely treason against the government of the United States; it was treason against the ideal of the United States as the nation where “we hold these truths to be self-evident, that all men are created equal.” The Confederacy explicitly aligned itself against this notion – believing instead that white supremacy was the natural order and the cause of equality was something to be earnestly fought against.

Then after they lost, they began a decades long campaign to obscure and cover-up the truth of the cause for which they fought. They trotted out tariffs and taxes and other illusory notions. Anything to hide the truth that the Confederates explicitly went to war to build a nation “upon the great truth that the negro is not equal to the white man; that slavery subordination to the superior race is his natural and normal condition.”

Which is why it’s important, on this day of days, to remember the Union cause, and why it was just. It was a defense of a nation that was “conceived in Liberty, and dedicated to the proposition that all men are created equal” against those who would tear it down.